Twitter has over 100 million users and is expanding its network with a whole new, "Suggestions For You" feature, which can be related to the similar Facebook "People You May Know" application. The feature enables access to a database of millions of Twitter users, and gives you suggestions to friends you may wish to follow.

Similar to the Facebook friend suggestion feature, it allows you to see a list of people that you are not following currently, but may be interested in. Matching you up with people who are following the same people as you. It has the option for one click follow, as well as being able to hide them. If they are hidden, they will not be suggested again.

Below is an example the new feature, showing us the usual layout of Twitter and where the tab is now located. 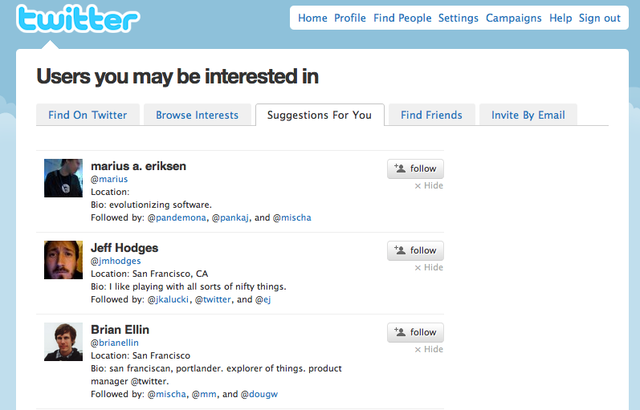 It will also record which user accounts you visit and gives you a new set of suggestions for people that you may wish to follow. All these features are available to developers and soon to be present 3rd party applications.

"We will be launching an API so third parties can provide these suggestion features in your favorite desktop, mobile, and web applications, too." Said cpen of the Twitter Blog.

The feature is available now for all users of Twitter.