Anno, a series which blends real-time strategy and city building, is celebrating its 20th anniversary this year. To mark the occasion, Ubisoft is giving away a free copy of the game that started it all. 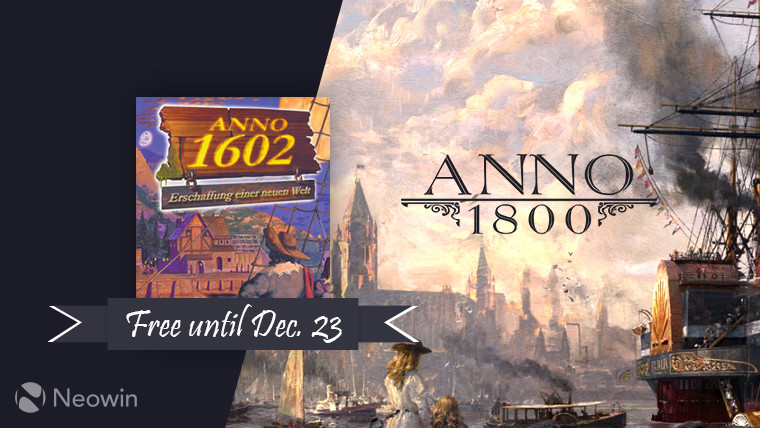 Anno 1602: Creation of a New World was released in Germany in April of 1998, followed by the rest of the European territories in September of that same year. On February 1, 2000, the title debuted in North America.

The brainchild of Austrian company Max Design, Anno put the emphasis - and still does - on rather difficult business simulation (in this case a balance of resource management and city construction), which may scare some folks away. Nonetheless, the first title sold around two million copies, making it the best selling Austrian title at the time. Both it and its sequel, 1503: The New World, were published in Europe by Sunflowers Interactive, which later acquired all the rights to the franchise.

Sunflowers and Related Designs were responsible for the next entry in the series, 2006's Anno 1701. The latter, in collaboration with Blue Byte, created Anno 1404 and Anno 2070. While Blue Byte - maker of the Settlers series - was acquired by Ubisoft in 2001, Related Designs didn't become part of the French publisher's roster until 2007, then being merged into Blue Byte in 2014. This is why the two latest titles, Anno 2205 and the upcoming Anno 1800 have Blue Byte listed as the developer.

As a quirk of naming, adding up the numbers in the title of an Anno game always equals 9. It's a little detail that seemingly won't go away anytime soon.

And now that the history bit is out of the way, you can head over to this link to claim your free copy of Anno 1602: Creation of a New World, or alternatively just fire up your Uplay client and the giveaway should be front and center. The announcement post has the giveaway ending on December 22, while the Uplay promo states it ends December 23 at 1am UTC (that's 8pm ET or 5pm PT in the States).

As mentioned before, a new installment, Anno 1800 is set to arrive next year on February 26, so Ubisoft has also announced a closed beta which will kick off on January 31. To check out the requirements for signing up to the beta head over here.

In addition to all of the above, as a celebration of the two decade anniversary, there will be an AnnoAfternoon stream on Twitch on December 20. Starting at 4pm CET - 10am ET / 7am PT in the U.S. -, this will be a "trip down to memory lane with the one legendary game that started it all: Anno 1602". There's also a surprise teased for Friday, but of course, we'll have to wait until then to find out what it is.

While you're collecting free games, might as well add Sins of a Solar Empire: Rebellion too, since it's free on Steam.