Without doubt, the maker space has gathered real momentum over the last half decade with significant interest in the various incarnations of the Raspberry Pi as well the numerous boards that support Arduino platform.

UDOO has already made a name for itself in the Arduino space with its UDOO Dual and UDOO Quad single board computers launching on Kickstarter back in April 2013. These were followed up by the UDOO Neo, launching two years later in April 2015. Both campaigns were successfully funded and fulfilled despite some delays in the shipment of all units.

Like many Arduino boards, both the UDOO Dual/Quad and Neo boards were built with ARM CPUs. However, there have been a number of x86-based Arduino-certified boards including both generations of Intel's own Galileo board that have made it to market. UDOO is preparing to join these ranks with its own offering in the form of the UDOO X86. 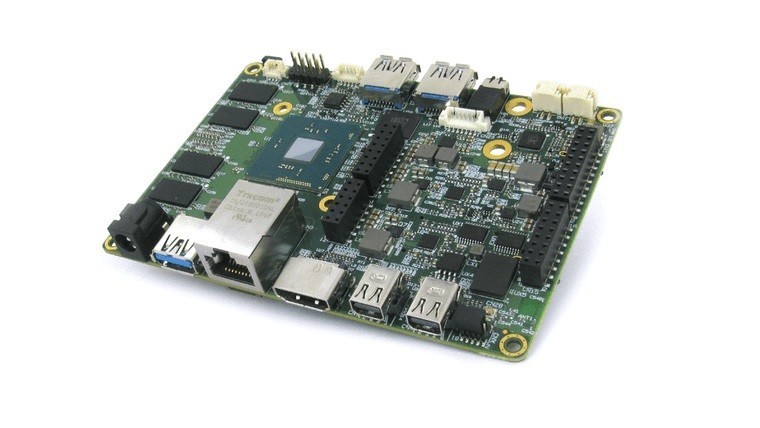 Billed as "the most powerful maker board ever", it is claimed to be ten times more powerful than a Raspberry Pi 3 in a multi-threaded CPU SysBench test and capable of running three 4K outputs simultaneously. Trumping the 32-bit Galileo boards, the UDOO X86 is 64-bit from the outset packing in a 64-bit CPU starting with a 2 GHz Intel Braswell CPU paired with 2GB RAM in the Basic version which ramps up to a 2.56 GHz Intel Pentium CPU with 8GB RAM in the Ultra version.

In terms of connectivity and expansion, the board manages to cram in gigabit Ethernet, three USB 3 ports, an M.2 Key B slot for storage, an M.2 Key E slot for wireless modules, an HDMI output and two mini DisplayPort outputs.

UDOO X86 also embeds compatibility with Arduino 101 which is connected to the Intel CPU through an internal USB port. This would allow the Arduino board components to continue operating and, if required, wake up the Intel CPU when it is powered off. The board is also versatile in terms of supported operating systems which spans Linux, Windows and Android.

At the time of writing, the UDOO X86 Basic, Advanced and Ultra boards can be had for as little as $89, $109 and $209 respectively. Bundled performance kits can be included for an additional price which will add an SSD, dual-band Wi-Fi and Bluetooth module, case and cables.

For those looking for an all-in-one maker board, an Intel-based media centre solution or something to use as the basis of a Steam machine, then this may be an enticing purchase. However, be prepared to wait as delivery is currently estimated for November 2016 and, as with many crowdfunding projects, timeframes can and do slip.