UK schools are delving in to a whole new level of creepiness by rolling out an unprecedented level of surveillance that one parent compared to reality TV.

As a society, we're pretty comfortable with a certain level of surveillance. It's not uncommon for businesses to deploy a few cameras here and there, or to see them scattered around public areas, but what about places like bathrooms, or changing rooms? Apparently, although it's illegal for private groups to try and pull something like that, it's perfectly okay for the government to roll out CCTV (closed-circuit television) cameras in private areas in UK schools.

Big Brother Watch, a British privacy advocacy group, says that there around 47,806 cameras installed in 2,107 schools around the UK. That's over one camera for every 5 students, and one institution even has 20 cameras installed in toilets and changing areas. Seriously.

This handy little chart will give you a better idea of what's going on: 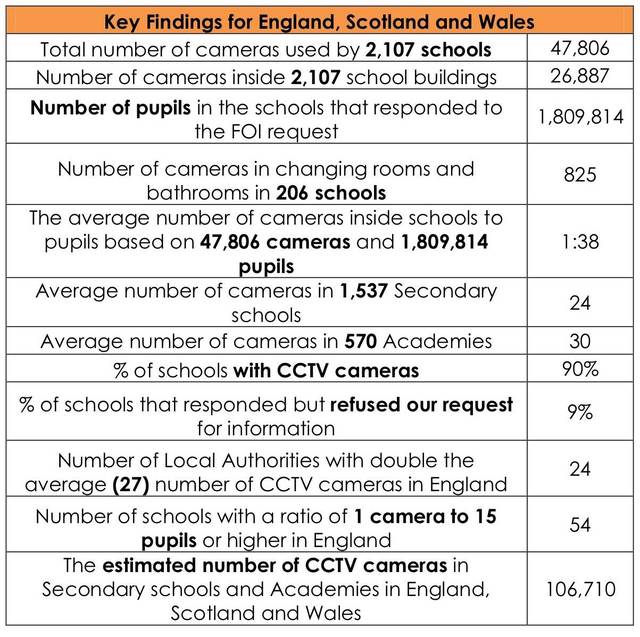 So, what's the point of all this surveillance? Big Brother Watch's report shows that it really hasn't done much to curtail crime, whether it's among students or outsiders trying to enter the schools. And while it's easy to pass it off as another useless, invasive attempt at 'keeping the children safe,' others take a more sinister view.

Speaking to TechEye, Charles Farrier, an anti-CCTV activist, said that the report highlights "the worrying degree to which children are being tacitly taught that surveillance is a good thing."

We think it's important to remember that even as technological advancement helps to empower people, it can be used to control, manipulate and destroy as well. And with invasive laws like SOPA and ACTA attempting to assert tighter control around our new digital media, we need to be on guard now more than ever before.

So what's your take? Is it for the greater good, or just another example of technology being abused to gain more control over citizens? Let us know in the comments section below.