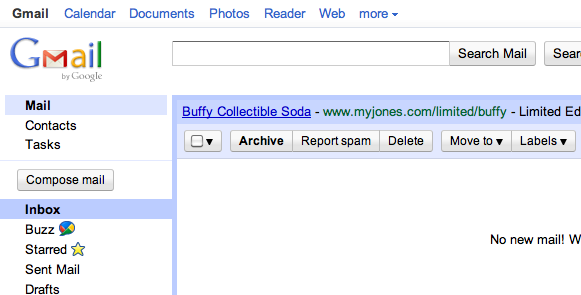 An abundance of Gmail users woke up today to find that their accounts have been reset; rendering all of their settings, their labels, their themes and addons, and more specifically their emails deleted.

Reports from users have been flooding Google's support forum all day with dozens, perhaps hundreds, of claims that their respective inboxes have been wiped out; users state that they are receiving a "500 server error, code 82" message when they log in but can still receive new messages.

It appears, however, that other Google services, like Docs and Calendar, are working as they should. The following was noted by Patrick Riley, a Gmail user, on Google's support forum:

Also my labels are reset to normal also. nothing (sic) else was affected google docs and calendar still have all my files. But this may have ended my career not being able to access my important emails.

As per usual, countless users have taken to Twitter, also, to express their frustration.

Google has officially acknowledged the situation and has stated that the issue is affecting less that .29% of their users; the company is reportedly working to restore all emails, as well.

Update: Google has revised their estimate of users affected by the error down from .29% to .08%