Valve is trying to help solve an electronic entertainment issue that has been around for decades: virtual reality that actually is appealing for gamers to use. As part of its Steam Dev Days conference, the game developer showed off its own VR technology and claimed that consumer devices could be ready for sale within two years. 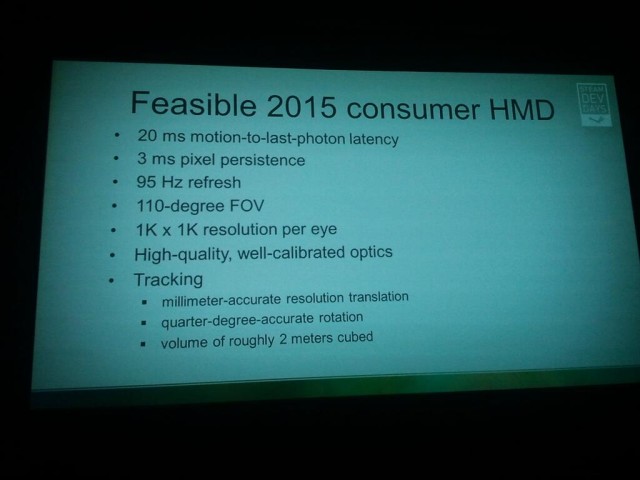 The VR session was lead by Michael Abrash, who has worked at Microsoft and id Software before joining Valve in 2011. According to Twitter messages from conference attendees that were collected by SteamDB.info, Valve offered up what kinds of features might be included in a future consumer VR product in a slide presentation. One of the big problems with current helmets is that they create motion sickness in players but Abrash believes these problems can be solved in two years.

Valve says it is working with the Oculus VR company to help improve its Oculus Rift helmet, specially with its head tracking, and that both groups are committed to improving that technology. While Valve has made its own prototype VR hardware device for research purposes, Abrash stated that the company currently has no plans to sell a version to the public, although he added that could change. The PC will be the centerpiece of new VR technology, according to Abrash, because that platform is the most powerful and continues to improve.

Game designer David Hensley, who works at Tripwire Interactive, posted word on his Twitter account that he got a hands-on demo of Valve's VR technology this week. While no pictures were allowed, Hensley stated that the experience was "very much like a holo deck."

@NM_Jeff it was many experiments. I could walk around an area freely and felt like was in an altered state of consciousness.

Oculus VR founder Palmer Luckey held his own panel today as part of Steam Dev Days and said Valve's VR technology is already the best in the world. He stated that PC games simply cannot be ported over to work on a VR helmet and that developers must try to innovate to make good VR-based games.

Today is the last day for the Steam Dev Days conference. While the event was not open to the public or press, Valve has promised that videos of the panels will be released in the near future.