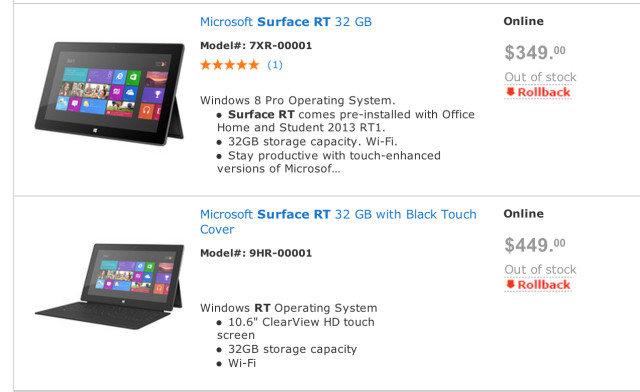 Facing steep competition in the market, Microsoft recently dropped the price of the Surface RT by $150. The company was able to cut the price by writing down the inventory to the tune of $900 million, and it looks like that price cut may have been the key to move inventory.

If you head on over to Walmart’s page and you are looking to buy a Surface RT in the 32GB version, the site is temporarily out of stock of the tablet. Now, this is only one version of the device, and we know it’s not a huge milestone as stores frequently sell out of products, but to sell out of the Surface RT that had not been moving very well is something to celebrate for Microsoft. Also, considering that Walmart is a massive vendor, it’s likely safe to say that they had a large inventory of the devices that they were able to move in a modest time frame.

Microsoft is already testing the next generation of the Surface that will feature the "typical improvements," but with the write-down of the Surface RT, it will be interesting to see if Microsoft continues to push the Surface RT brand, or will it pull back as Intel has already shown that it can compete in the low-cost, low-heat, performance market.