For the past few months, the Windows 10 user base on Steam has either been declining or flatlining. This month, it appears that the operating system is finally regaining lost ground, clambering up to an all-time high of 51.23%.

According to Steam's hardware report for the month of June 2017, the 64-bit version of Windows 10 is being utilized by 50.33% of users, while 0.90% are running the 32-bit iteration. Together, this accounts for a total of 51.23% of surveyed users. Although this is only marginally greater than the 51.20% reported back in April, it still registers itself as an all-time high for the operating system. 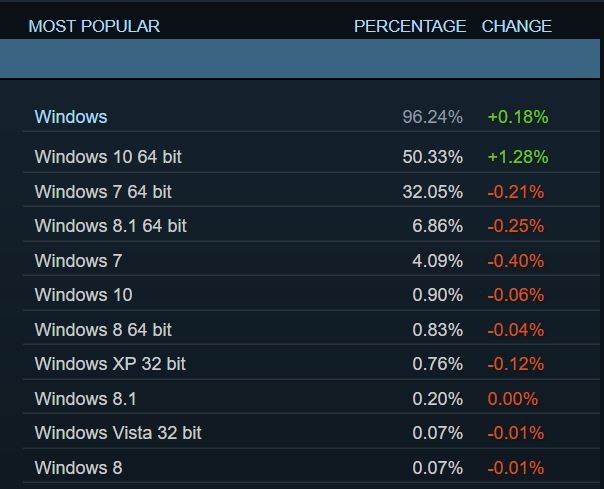 Meanwhile, Windows 7's user base fell to 36.14% - compared to the 36.75% reported last month. While all versions of Windows faced a decline with the exception of Windows 10, the operating system's user base still grew to 96.24%.

On the other hand, Apple's OS X faced a slight decrease and shrunk to 2.95%. MacOS 10.12.5 was the only version to register an increase in user base. Alas, it is still not the year of Linux on desktop, with the operating system falling further to 0.72%.

In terms of hardware, statistics exhibited the same trend that we have been seeing for quite some time. 8GB of RAM is the most-used configuration, and the display resolution for primary displays and multi-monitor setups was 1920x1080 and 3840x1080 respectively.

While the report does show some rather interesting statistics, it is important to note that the data in Steam's report is based on optional user surveys and may not entirely depict the real situation.