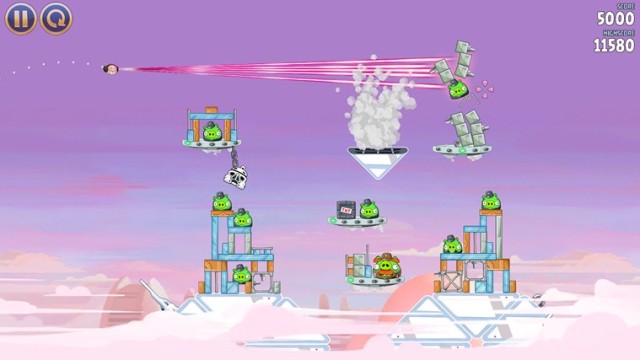 Angry Birds Star Wars was released for Windows Phone 8 and Windows 8/RT on November 8th, on the same day the Rovio action-puzzle game was launched for the iOS and Android platforms (the Windows Phone 7.5 version was released about a month later). However, all of the versions of the game made for Microsoft's platforms fell behind the iOS and Android ports when it came to content updates.

Today, Microsoft's versions are finally catching up. The $4.99 Windows 8 and RT port of Angry Birds Star Wars now has been updated to include 20 of the Cloud City levels and all of the Hoth missions, along with the special Boba Fett missions. The other Cloud City levels should be released in a future update.

The Windows Phone 8 and Windows Phone 7 ports, which both cost 99 cents each, have now been updated today to include all of the Cloud City levels and the special Boba Fett missions; the Windows Phone version already had the Hoth updates.

A quick reminder: The original Angry Birds game, minus the Star Wars content, is available for free for Windows Phone 8 until May 14th. It also got a quick update today that fixed a couple of bugs.