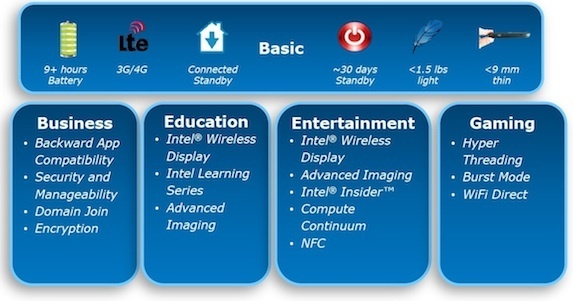 The tablets themselves will have Intel's upcoming mobile processor, code named Clover Trail. While the processor is dual-core, it would also allow for "burst mode" and Hyperthreading features in order to boost performance. While some of the products will be pure tablet devices that would be 10 inches in size, others will be a hybrid of a tablet and a notebook, such as the ones that Intel showed off at CES 2012 in January, that would have an 11 inch screen.

The Windows 8 tablets would support 3G and 4G networks out of the box, along with a battery life of nine hours, with 30 days of standby power. They would also be 9mm thick and weight about 1.5 pounds, All of those recommendations are close to the hardware and design features of Apple's iPad.

Hopefully we will learn more about all of these upcoming Intel-based Windows 8 tablets later this summer ahead of the Windows 8 launch.