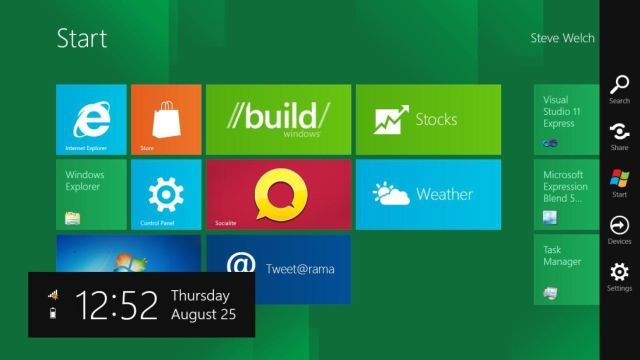 Even as Microsoft is in the middle of holding its BUILD Conference in Anaheim, California this week and revealing lots of new features for its upcoming Windows 8 operating system, the company is still taking some time to update its official Windows 8 blog site. The latest blog entry, added late on Tuesday, goes over how Microsoft has been testing Windows 8's touch screen features with an article co-written by Grant George, corporate vice president for all of Windows testing, and Jeff Piira, a test manager for Microsoft's HIP team.

According to George and Piira, "Every touch interface has its own challenges to develop and perfect. However, to the end user, what matters most is the smooth, responsive, and natural experience of interacting with a device using touch. This sensation of performance is something we have prioritized heavily in Windows 8." Some of the features that Microsoft is looking for in a good touch screen experience for the user include making its panning and touch response smooth and precise, allowing users to type on the screen and have it be "quick, efficient and responsive" and having all the applications work the same, no matter which touch screen-based device that has Windows 8 installed.

Microsoft is currently testing Windows 8 on a variety of PCs and other touch screen devices. George and Pirra writes, "Touch quality is not only about the touch screen and its relationship to the user. When we’re testing complete systems, things like bezel design, graphics, CPU and cover glass can impact the Windows 8 touch experience as well. We are committed to supporting the hardware that is running with Windows 7 today and working hard to bring a good experience to our customers who upgrade."

George and Pirra go over two of the touch screen tests when they check out Windows 8 on current hardware. For example, wwiping a finger on the edge of the touch screen in Windows 8 brings up a selection of choices such as Search, Settings and more. They write, "To get the best experience when swiping in from the edge, touch must be responsive across the entire active screen starting at pixel 1 on each side, so we’ve developed tools to ensure that swipes are always properly detected at the edges of the screen." In terms of checking the panning features of Windows 8, they write, "We use a high-speed camera to measure input lag or delay between when a user touches the screen and when that action is reflected on the display. The less lag or separation between the user’s finger and the object being dragged the better!"