During the Windows 8 launch, Microsoft decided to buy ads to promote the new OS in many print magazines. In fact it took over the covers of several magazines owned by Conde Nast in November including The New Yorker, Vogue and Glamour, shown below. Now there's word that Microsoft has continued to spend lots of money on magazine ads in 2013. 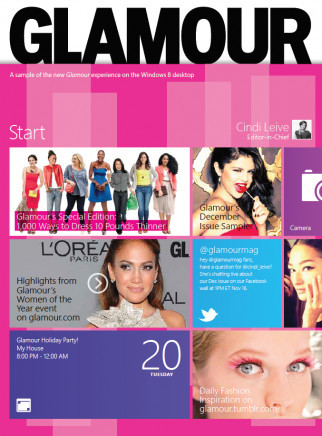 Mashable reports that for the first quarter of 2013, technology companies increased their magazine ad spending by 21.6 percent compared to the same period a year ago. That amounts to $215.9 million. However, according to research firm Kantar Media, one of the big reasons for that increase was due to Microsoft as it continues to buy ads for Windows 8.

Jon Swallen, chief research officer of Kantar Media, stated, "Microsoft launched significant campaigns in the first quarter for software products, particularly for Windows 8. The company also launched some campaigns for Office 365 ... But the increase, it's all Microsoft."

There was also big ad campaigns for the launch of the BlackBerry Z10 smartphone in the first quarter as well. However, we can expect that Microsoft will continue to push Windows 8 in magazine and TV ads in the months to come as we all await the official reveal of Windows 8.1 later this year.