There's been a lot of activity lately in terms of both new Windows 8 apps as well as updates for existing apps in the Windows Store. This week the very popular free ESPN app got a major update with a number of new features. 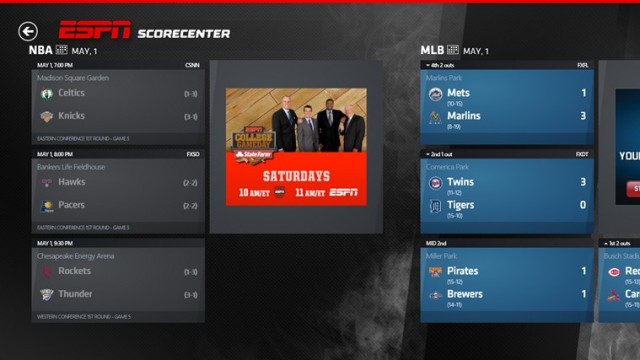 The ESPN app is now available in a new 1.2 version and features a newly redesigned main hub page, as shown above, along with a redesign for its news feed page. A new version of the app's integrated video player has also been released, along with the new ability to pin podcast channels. There's also been some performance improvements made to the ScoreCenter feature, while the app now has more flexible, responsive design that can adapt to being viewed on displays at 1366x768, 1920x1080 and 2560x1440 resolutions.

The app's update notes also revealed that in the near future, it will add a long-awaited soccer category to the mix as well as more personalization features in myESPN and in the main hub.

Two other major Windows 8 apps received smaller updates this week. The new version of the Nokia Music app has some stability improvements along with a bug fix related to the app's lyrics feature. Also, the AccuWeather app has received a small update to fix some unnamed bugs.