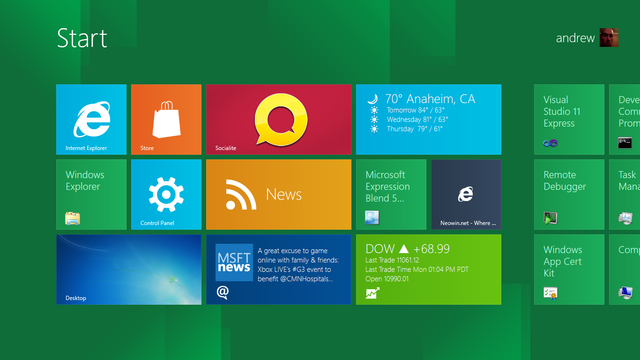 Over the last two years, the world has watched as tablets have become one of the hottest selling devices of the century; an entire computer in the palm of your hands without the chunkiness of a laptop.

As it appears that Microsoft has sat back for the past two years without as much as hint of them entering the tablet game, you would be wrong. Microsoft has been very hard at work to take the next giant leap forward in offering tablet users a unique experience, as well as offering users a desktop experience like they would on their home computers.

Microsoft has taken the speed of a tablet interface and the power of a full desktop operating system and merge the two.

Not only was Microsoft looking to create the successor to their most popular operating system, Windows 7, but to take on Apple in the tablet market, which is currently the king of the hill by a large margin.

Microsoft has unveiled their latest major project, Windows 8. Not only will Windows 8 be a big upgrade to Windows 7, but it will also run on tablets with a lightweight and easy to use interface, similar to that of Windows Phone OS 7.

Microsoft promises to really deliver with Windows 8 by keeping the system requirements low for older systems, but also be a performance horse for even the highest end users.

Metro is Microsoft’s name for the new interface of Windows 8 tablets. The tile based operating system will run on top of Windows 8 full desktop experience, but allow for users to switch back and forth between the two, allowing for maximum productivity without the need for multiple devices.

If users are familiar with Windows Phone 7, they’ll fit right in with the horizontal scrolling tile operating system. While the interface is almost finalized, the apps are not. Microsoft is only just unveiling their brand new operating system to developers so they can begin creating amazing apps.

Metro’s interface allows for ultimate customization, including the lock screen, the tile layout, and even how you group your pages and apps.

As Metro will only be successful with great developers the preview comes with a number of test games to demonstrate how well Windows 8 handles.

Windows 8 developers will be easy to find with a wide variety of programming languages available for their platform. Microsoft is also offering an easy transition tool for Silverlight developers to port their applications over.

As users will experience with the Metro UI, each tile can contain another set of tiles, perhaps pictures, RSS feeds, video demos and much more.