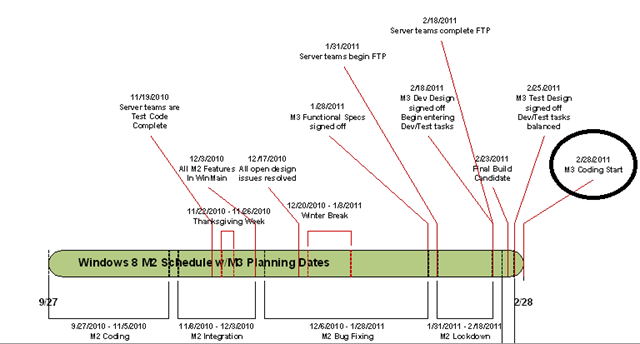 A recent roadmap shown off by Mary Jo Foley over at Zdnet tells us a story about how the progress work for Windows 8 M2 was scheduled. The timeline also tells us that Microsoft is planning to start coding Windows 8 M3 next week on Monday.

According to the timetable, Windows 8 M2 coding began back on September 27, 2010 and it took slightly over a month to complete. On November 5, M2 was integrated where it began its bug fixing on December 6. The weeks to follow focused on more bug fixes and 'locking down' the code.

Windows 8 M3 is already scheduled to begin coding next week on February 28, 2011. If the development for M3 is anywhere near the length of time as M2, Windows 8 RTM would be right on schedule for a mid-2012 release.

Another interesting thing to point out is that the final build candidate for Windows 8 M2 will be signed off on Wednesday, and the developers tasks will be assigned on Friday.