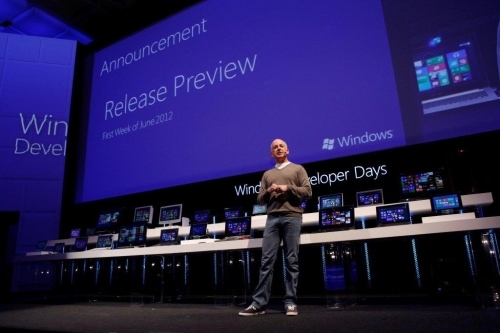 Steven Sinofsky, president of Microsoft's Windows Division, took the stage for the first day of the Windows Developer Days conference in Japan to announce the Release Preview of Windows 8 will launch during the first week of June. The news confirms previous speculation that the Windows 8 release candidate would be called a "Release Preview." Microsoft's Building Windows 8 Twitter account confirmed the news via tweet, providing the announcement photograph seen above and the following statement:

Microsoft provided no additional information about the Windows 8 Release Preview beyond its release date, nor did it confirm if there would be a Release Preview of Windows RT, the ARM-based version of Windows 8. Microsoft gave out Samsung tablets to developers at the Build conference in September, but the tablets run on an Intel x86 processor. So far, Windows RT has been seen infrequently, primarily through Microsoft-led demonstrations.