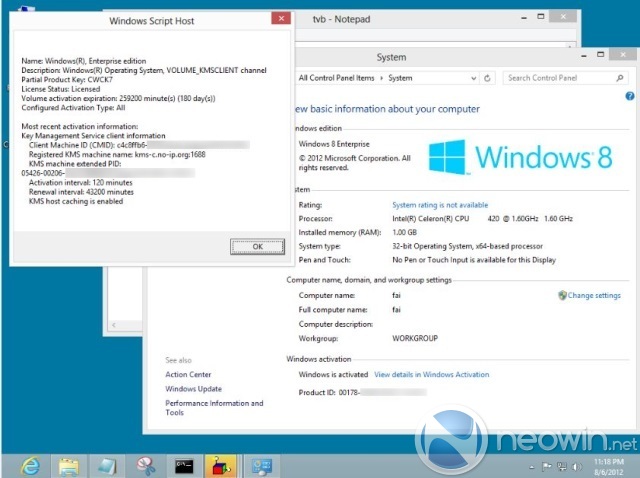 It only took a few days, but all of the Windows 8 RTM editions leaked by AngelWZR have now been cracked, allowing people who have downloaded and installed them to activate Windows, if they know where to look.

The crack bypasses the Microsoft KMS servers which allows for 180 days before it needs to check it against a valid server again, AngelWZR posted the evidence on yfrog showing a customized Start screen. An image (shown above) showing post activation and Windows Experience Index (WEI) had been completed was also submitted to Neowin.

Up until this news, the leaks allowed people to run Windows 8 in "notification mode" which meant that every so often, a reminder would show up telling the user to activate Windows.

The first leak came a day after Microsoft handed over Windows 8 RTM bits to OEMs, and was the Enterprise "N" edition which is sold in Europe without Windows Media Player. Then yesterday four more ISOs leaked, first of all both x86 and x64 versions of Enterprise, followed later by the Professional version of Windows 8 which replaces the "Ultimate" SKU of Windows, used for Vista and 7. These were said to be untouched images directly from Microsoft, whereas the first leak was a modified image with an embedded volume license key.

Obviously we won't post details of that process here, and we would ask that people don't do so in the comments either.

If the more recent news is to be believed, people who have "tested" the RTM leaked versions may still want to dig into their pockets for a genuine version of Windows 8 Professional when it becomes available, because it might only cost around $70 dollars.

Thanks for the tip, he who wishes to remain anonymous.