The tens of millions of Steam subscribers continue to transition over to Windows 8. Today, the Steam Hardware Survey website shows that for June 2013, 13.02 percent of Steam users are accessing the service via Windows 8.

The new hardware survey numbers show that the pace of new Windows 8 users on Steam has slowed somewhat compared to previous months. In May 12.72 percent of Steam subscribers accessed the service on Windows 8, meaning that for June Windows 8 went up just 0.3 percent in the survey. However, it looks like the 64-bit version of Windows 8 is close to surpassing the 32-bit version of Windows 7 on Steam. If the trend continues, the Windows 8 64-bit SKU will be the second most popular OS on Steam in July. 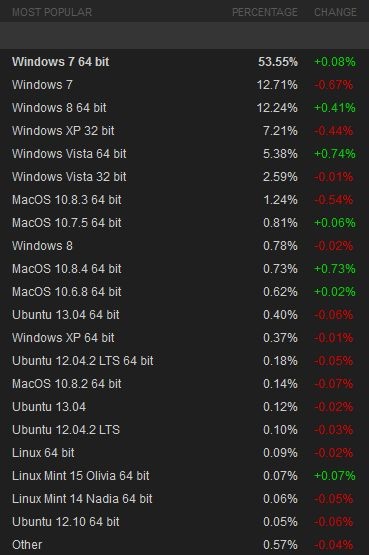 Naturally, Windows 7 is still the highest on the Steam hardware survey with the OS claiming 66.23 percent of all Steam users for the month of June. That's down from 66.63 percent in May.

Windows XP was used by 7.58 percent of Steam subscribers in June, down from 7.97 percent in May. The number of Steam users still using Windows Vista was listed at 7.97 percent in June, which is up from 7.25 percent in May. This is the third month of percentage gains for Windows Vista on the Steam survey. Finally, those accessing Steam via Mac and Linux continue to be well below nearly all versions of Windows on the Steam survey.