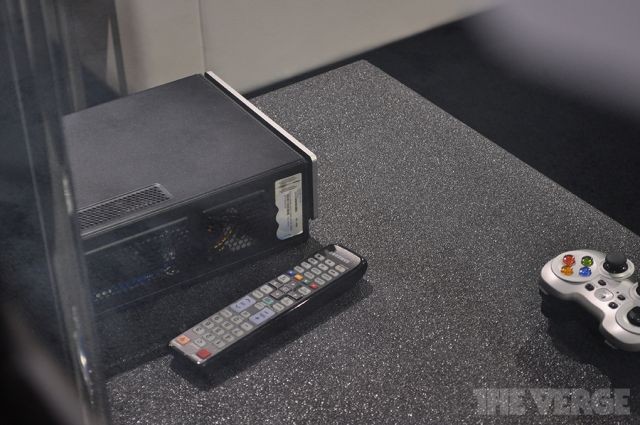 On Monday, it was announced that PC maker Xi3 was working on a PC that was designed to specifically work with Valve's Steam PC game client and its "Big Picture" mode. Valve has also invested an unknown amount of money in Xi3. However, Valve has also indicated it might launch its own in-house "Steam Box" PC as well.

Today, The Verge took some pictures of Valve's own "Steam Box" prototype when they visited the company's CES 2013 booth. One of the images clearly shows a Windows license sticker affixed to the side of the prototype case. That would see to confirm that Valve's "Steam Box" prototype, or at least this particular box that Valve brought to Las Vegas, is running some version of Windows.

Valve in general, and its founder Gabe Newell in particular, have been highly critical of Windows 8 in the past several months. The company has been working on bringing its Steam client and many games to the Linux platform. Indeed, Valve employee Drew Bliss claimed a few months ago that Linux was in fact better suited to PC gaming than Windows 8.

As we have noted a few days ago, Steam's own hardware survey stats show that Windows 8 is now being used by 6.93 percent of its users, less than three months after its official launch. That's just 0.03 percent behind the total number of current users for Windows Vista, which came out close to six years ago. Windows 8 has already eclipsed the total number of Mac and Linux users on Steam.

The Verge also reports that Valve is at CES to meet with a lot of potential "Steam Box" hardware partners; the Valve rep said that the company has about 15 to 20 meetings planned during the trade show. No specific PC makers were mentioned but the rep claimed that people "wouldn't be surprised" by any name on their meeting list.

Update: Engadget reports that, according to Valve hardware engineer Ben Krasnow, the company has "no current plans to announce anything in 2013" in regards to its own Steam Box, although it hinted it might make some other hardware related reveals this year that have nothing to do with a Steam Box. Krasnow added, "The box might be Linux-based, but it might not."