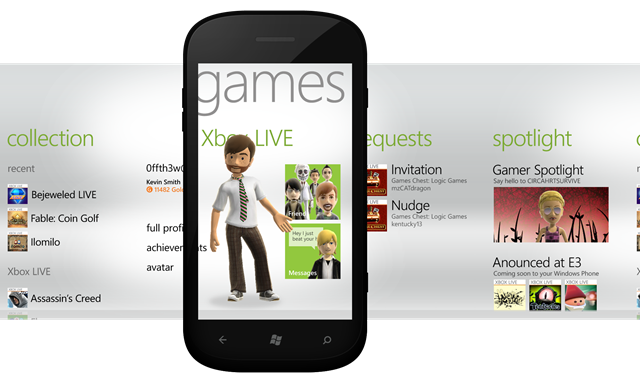 As Microsoft prepares for the release of the much hyped "Mango" update for its Windows Phone 7 operating system, the company is revealing more info about what new features will be put into the Mango release. Today the official Windows Phone blog site has a new feature that goes into more detail on the changes for the Games Hub section of the operating system and how it links up to Microsoft's Xbox Live service.

For the Mango update, users will find that their Windows Phone 7 games will be listed alphabetically with the game's title on the right and an icon on the left. If your games collection exceeds 20 game titles, the Games Hub will then reorganize your list so that the last three games you have played will be on top of the list. This should allow WP7 users to quickly access the games they play the most.

Xbox Live users on the Xbox 360 console are used to the 3D avatars that can be customized with clothes and more. Currently Windows Phone 7 users only show avatar in the games section as 2D images. The Games Hub in the Mango update will add fully animated 3D avatars on the phone's screen. Other features that currently are part of WP7's Xbox LIVE Extras app will now be a part of the Mango's Games Hub.