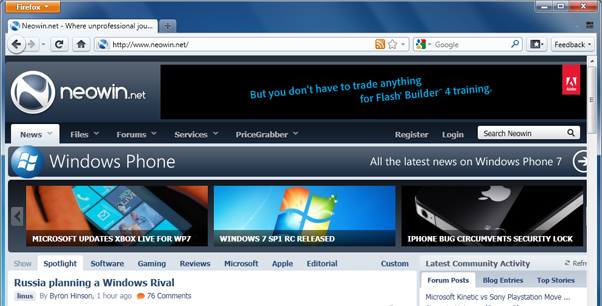 Mozilla, creators of Firefox, announced today that they are forced to delay their up and coming version, Firefox 4. In May, the browser giant announced that the release date for the new version would be next month, although recent circumstances have pushed them to delay the release.

Currently, Firefox 4 is on its sixth beta release and will stay in beta until its first RC release which is said to be in early 2011. The final release is said to follow the RC(s) swiftly after.

Talking to The Register about change to Mozilla development mailing list, Mike Beltzner, headman for Firefox said "Based on the delays in completing the 'feature complete' Beta 7 milestone against which our Add-on developers and third-party software developers can develop, as well as considering the amount of work remaining to prepare Firefox 4 for final release, we have revised our beta and release candidate schedule,".

The Firefox community was said to have been informed about the circumstance and changes to the schedule were based on feedback. The new schedule was released into public domain. With Opera in the process of developing Opera 11, it seems the release of both Firefox 4 and Opera 11 could be released extremely close together.