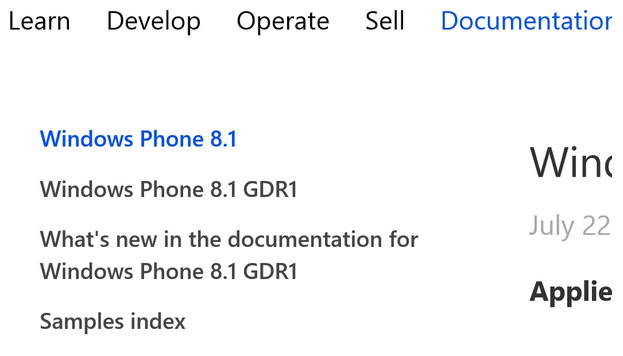 If you own a Windows Phone, this has been a good month for you as Windows Phone 8.1 has started to roll-out and the Lock Screen app has finally be released. With Cortana and a ton of other features, read our review here, the 8.1 update is a huge improvement to the OS. But, the fun doesn't stop there as we have learned today that the first update to 8.1, GDR 1, has made another appearance on the Windows Phone OEM portal.

That's right, Microsoft is steam rolling ahead with Windows Phone updates and the rapid release cadence is alive and well in this division of Microsoft. To keep Windows Phone moving forward, GDR 1 of the next iteration of Windows Phone is nearing, or may have already hit the RTM phase. The best feature coming in this update is the addition of native folders for the OS and we have already seen some of that documentation leak.

The reason we say it may have hit RTM is that one source has told us that this has occurred but we have yet to find another source to verify this claim. So, take it with a pinch of salt that it has hit RTM but we have had multiple sources tell us, late last month, that RTM was going happen in the near future.

We don't have any specifics on when this update will roll-out but seeing that Microsoft is already communicating the update to OEMs, it shouldn't be too far into the future that this update will hit your handset.

For those of you who are still waiting for Windows Phone 8.1, you can check out the status of that update release by visiting this link, here.