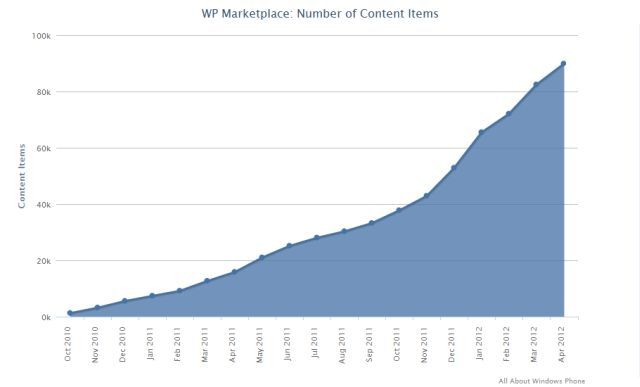 The Windows Phone Marketplace has continued to add new apps for Windows Phone owners to download and/or purchase at a rapid pace. This week, the Marketplace exceeded the 90,000 app mark in terms of the total amount of apps that have been published.

The information comes from All About Windows Phone, which uses its own tracking system to detect the number of apps in the Marketplace. The app download store reached the 80,000 app level on March 26th and it took 35 days to reach the 90,000 mark. If Windows Phone app submissions continue at their current place, the Windows Phone Marketplace should reach the 100,000 app milestone sometime in early June.

So far, 22,000 different app publishers have chosen to submit apps to the Windows Phone Marketplace. At the moment, apps are being published at the rate of about 250 apps per day. The report also states that 10,500 apps that have been published have since been withdrawn from the Marketplace.

Microsoft has been seeing more and more high profile Windows Phone apps being released recently. They include the new LinkedIn app and the Time magazine app. Nokia also announced plans to offer exclusive Windows Phone apps for its Lumia phones, including apps from Groupon, ESPN and AOL.

Image via All About Windows Phone