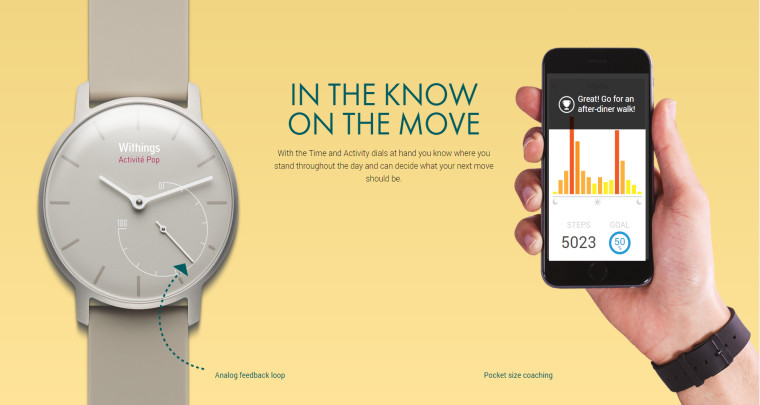 While most of us would probably be looking forward to buying the Apple Watch, Samsung's wearables, the Moto 360, Fitbit's fitness trackers or the scarcely available Microsoft Band this year, there are still many people who would rather buy a relatively affordable smart watch instead. Withings is one of the brands looking to target this specific audience.

Withings Activité Pop is a $150 analog smart watch which is a follow up to their high end fitness tracker released last year. This device has the same features as the previous one but lacks the deluxe materials used to build the $450 Activité. Built mainly as a fitness tracker, this device is made using PVD-coated metal, pedestrian glass and a silicone strap. The device can resist water up to 30 meters (98 feet) and has a battery which can last up to 8 months.

Apart from the two handed analog face, there is also a smaller dial which counts your steps as you work for to reach your daily goal. When you accomplish it, the watch vibrates to let you know that you have achieved your daily mission. Furthermore, the watch can also monitor your sleeping time and can even wake you up with a vibration if you calibrate it as such.

Not surprisingly, Withings CEO, Cédric Hutchings was optimistic about this new device and the future of wearables stating that:

The activity tracker category has a huge problem with abandonment, and so consumers don’t really get to see the benefit of long-term data and the impact it can have on their health. It is time wearables step up to what they claim to be!”

Like every other smart watch, this one comes with a companion app as well. The app has been released for iOS and an Android version is in the works as well, unfortunately there has been no mention of Windows Phone support.

The device comes in three colors - Bright Azure, Shark Gray and Wild Sand, and is available for $150 on Best Buy; if it's unavailable at your local Best Buy, Withings promises that you'll be able to get your hands on the device by March as they move forward towards a wider release online. It will also be available in the UK for £119.95 by the end of this month exclusively via retailer PC World.