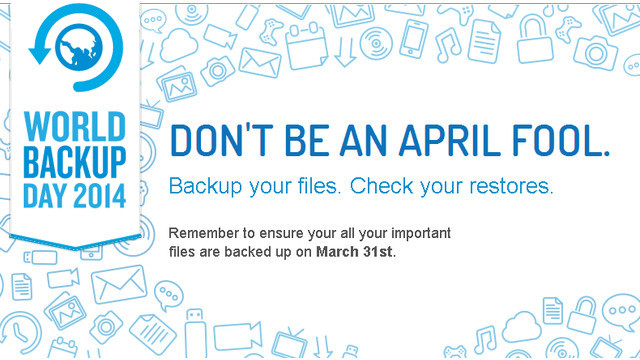 Backups are like flossing: Everyone knows it's important, but many people fail to take the time to protect their digital life. Although a lot of data is automatically protected in the cloud, most people have at least some data that's important to them that they fail to make backups for. This is even more pronounced in businesses where many organizations backup their servers but forget about the data that resides on an employee's computer.

Every March 31st is World Backup Day and the mission is to raise awareness of digital backups (and recovery!!!) by using a humorous tagline of, "Don't be an April Fool." It's important to remember that a disaster can strike at any time and will probably be something you aren't expecting, and to help illustrate the point, we interviewed A.J. Meyer, co-founder of GoKart Labs, and Andrew Renz, Principal Architect at Code42.

Meyer talked about a flood that hit his company's office in downtown Minneapolis. Being on the 5th floor, they never thought they'd have to worry about flooding, but a water main in the building broke, sending 300 gallons of water per minute through the building. Luckily the company knew they had solid backups using Crashplan, and were able to get up and running in less than 12 hours. Meyer quipped, "It took us longer to find new office furniture than it did to get up and running."

Our chat with Renz yielded similar stories, including one where an executive from a large social media company accidentally left their laptop in a cab an hour before a big presentation. Unfazed, he purchased a new laptop, installed Crashplan, and recovered the presentation he was working on. The key, Renz noted, was to make backups completely transparent to the end user. Even the most well intentioned people can forget to make a manual backup, but if it's constantly running in the background and doesn't impact your work at all, you'll always have your data available in a disaster.

So our question for you is: Do you have consistent backups (that you confirm with occasional restores!), or are you living on the edge?