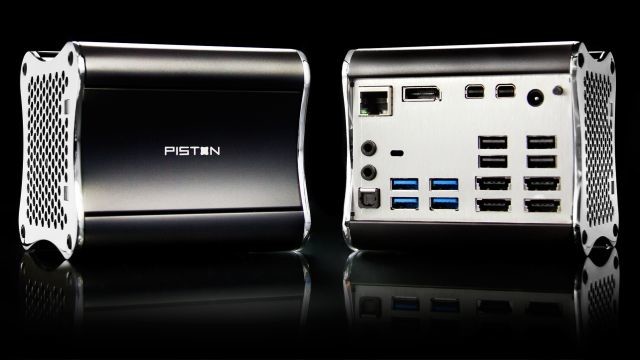 As promised last week, PC maker Xi3 has offered some new information on its upcoming PISTON PC. The company said that the PISTON will officially launch on Nov. 29 but that people who pre-ordered the PC during or before the SXSW Gaming Expo in March will have their units shipped on or before Nov. 15.

XI3 says the PISTON's Ethernet controller has been made so that it will "recognize and prioritize computer gaming data to the top of PISTON’s network queue." Xi3 will include a number of games that will be pre-loaded with every PISTON, but so far the details about those titles have yet to be announced. The website also has an image of a PISTON branded game controller but it's unclear if that will ship with the PC.

Earlier this year, Xi3 said it received an investment from Valve to make a PC that would work with Valve's Big Picture mode in Steam. Valve later said it was no longer involved with Xi3. Last week, Valve announced plans to offer its own Linux-based operating system, SteamOS, which is designed to be used in living room PCs. Even though Xi3 said earlier this year that it felt it was best to launch the PISTON PC "with a Windows OS at the core" the company is now no longer stating which operating system will be offered with the PC.  In an FAQ page on the Xi3 site, it says that it is still "a bit premature" to answer the question on whether or not it will use the SteamOS.

Xi3 plans to demo the PISTON PC to journalists and attendees at the Interop trade show at the Jacob Javits Convention Center in New York City on Oct. 2 and 3.