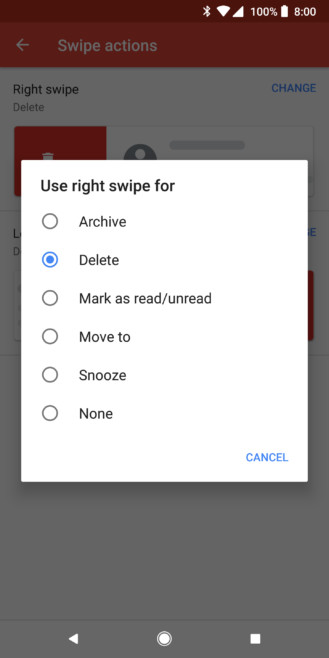 Last April, Google announced the biggest update for Gmail for the first time in a long while, introducing a slew of useful features to its email service. Now, the search giant seems to have rolled out another draw to Gmail for Android: the ability to modify swipe actions.

In the app's general settings, you can assign different actions to either the left or right swipe gesture in order to perform any of the following options: archive, delete, mark as read or unread, move, and snooze. Previously, the swipe gesture only allows you to archive an email.

Keep in mind that you can only choose one action for each swipe direction at a time, though you can change it at any moment in the future.

The feature is available in the latest update to Gmail for Android, which bumps up the version number to 8.5.20. Also, the snooze action, in particular, is one of the newest features added to the redesigned Gmail.

Android Police noted that the new feature may have been released via a server-side change exposed in the Android version of the app in the last few days. It now remains to be seen when the customizable swipe actions will come to iOS devices, though it could be expected in the short term.