Later today, we'll hear from Microsoft about some of its plans for gaming in its E3 keynote - and of course, a big part of that will be its Xbox One console. The company has some big stuff lined up for the gaming space, including its recently-announced new Xbox One package, with 1TB of onboard storage, and an updated wireless controller with integrated 3.5mm headset jack. 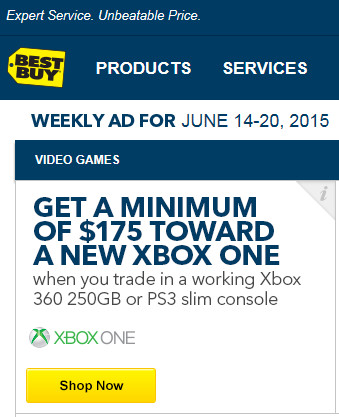 Microsoft has been working hard to find new ways to encourage gamers to buy an Xbox One - and for those who own its predecessor, the Xbox 360, or a PS3, Best Buy has now added a further incentive, as WinBeta reports. Until June 20, Best Buy is offering anyone with a working 360 or PS3 a $75 coupon towards an Xbox One when they trade in their old consoles; and if it's an Xbox 360 250GB or PlayStation 3 Slim, they'll also get a gift card worth a minimum of $100.

That means owners of those models will be guaranteed $175, perhaps even more, off the price of a new Xbox One when they trade in - but there is, of course, some small print involved:

Valid 6/14/15-6/20/15. In store only. Trade in any working Xbox 360 or PS3 console and receive a $75 coupon towards a Xbox One Console. Trade in a working Xbox 360 250GB® or Sony PlayStation® 3 Slim and receive a minimum $100 gift card. Not available in all locations and some stores may have additional limitations. Console must include AC adapter/power cord, power on, not be damaged or have its warranty seal broken to be considered working. Not compatible with other trade-in offers. You are required to agree to the Terms & Conditions. No Dealers. Limit of 1 trade per person. See a Customer Specialist or BestBuy.com/TradeIn for details.

While Microsoft is focusing heavily on the console's gaming capabilities for now, the company has also said that a beta of Windows 10 will be coming to the Xbox One later this year. Looks like Xbox One owners have plenty to look forward to.