Zen Studios, the masters of virtual pinball tables, have released another new table for the Xbox One (amongst other consoles). The company has a strong lineup of games in the Marvel universe, and even released  a table based on the Guardians of the Galaxy movie a few weeks ago. They also have a strong Star Wars presence, as well as many unique standalone tables.  This week they've shifted gears and released a table based on the Walking Dead game from Telltale Games.

Based on the first season of the video game with the same name, the table uses the voices of some of the main characters such as Lee and Clementine. It's important to keep in mind that I've never actually played any of the Walking Dead games before, although after playing this table I may reconsider that. 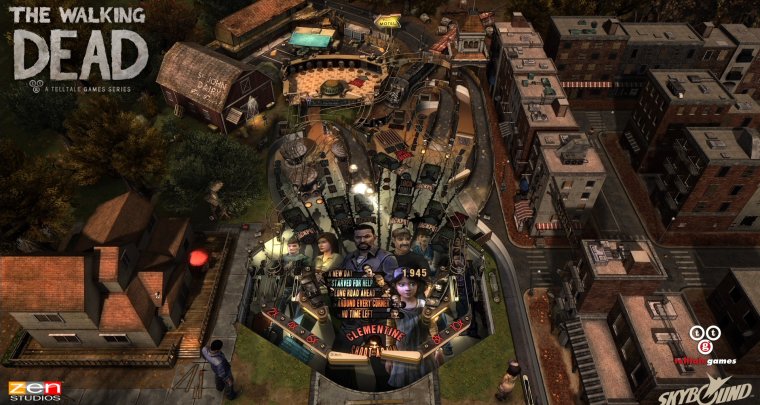 The game opens up with a pan of the table. As with most of the Zen Studios tables, the detail level is extremely high. There are walkers shambling around on the side of the table, wooden boards create makeshift fences for some of the ramps, and animated zombies block some of the areas you need to aim for.

The plunger has been replaced with a fireaxe that launches the ball onto the table, and instead of the skill shot being aimed for on launch, the player has to time the shot from the left flipper to the right-most ramp. It's a challenging shot to be sure, but this is a skill shot that really lives up to its name. 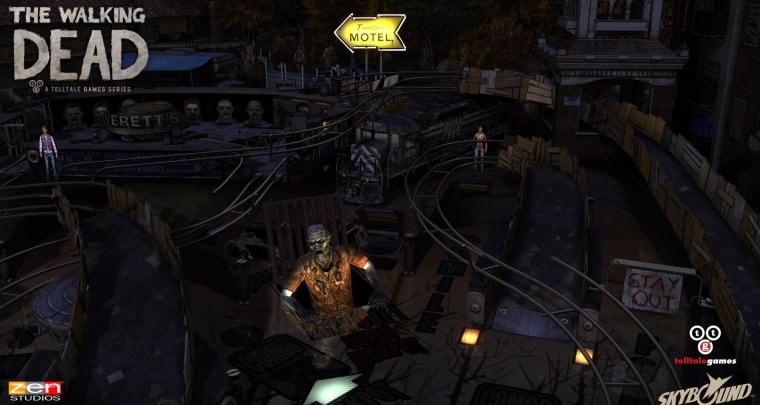 Starting an in-game mission is a fairly simple process: Hitting the walker that's coming out of the trap door three times sends him away, opening up the mission hole. The fourth shot lets you choose one of five different missions to play. I literally started a mission within twenty seconds of playing. That doesn't mean it's boring though, as the missions are what makes the table and they're very challenging.

Every time you start a mission, you're presented with a choice that you select with the flippers and confirm by launching, and the choices aren't tied directly to the specific mission, meaning you'll be presented with different options even after selecting the same mission. For example, you may be presented with the choice of telling the group that you were bitten or keeping that hidden; trying to talk to a member of the group or fight them; bring someone with you or leave them behind.

In theory, these decisions seem like they could make things more interesting, but in reality I never really saw much of a difference in gameplay. To make matters worse, I would frequently spend too much time reading the display, only to watch the ball drain due to my lack of attention. Maybe after playing a bit more, the choices will end up making more sense, but after a couple of hours of playing, I don't see that they added much. 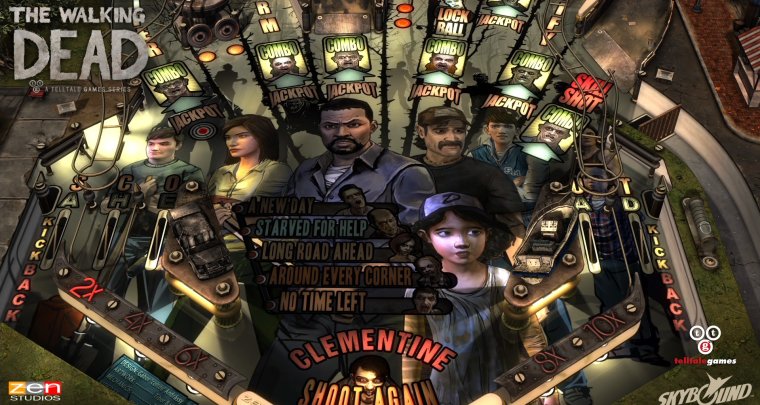 Most of the missions are what you would expect: Hit various targets in a specific order to complete it and get a bonus. However one of the missions, "Around Every Corner," takes a different twist. Instead of a normal pinball challenge, you're looking down the scope of a rifle, hunting walkers. By using the left and right triggers to aim your gun, you put the walker in your sites and then launch a ball at them before hunting the next one. If you destroy ten walkers within a specific amount of time, you gain a five million point bonus and complete the mission. While I applaud Zen Studios for trying something different, I don't think this mode really fits in with the rest of the game.

Other missions seem to pop up at random while playing. For example, the flashing LCD screen will tell you that your group needs food or ammo, and that you have to hit specific ramps to replenish these supplies. This is a nice touch, although there never seemed to be any penalties for not completing these side missions. In addition, similar to the mission choices, I found myself trying to read what I was supposed to do instead of focusing on the table itself. 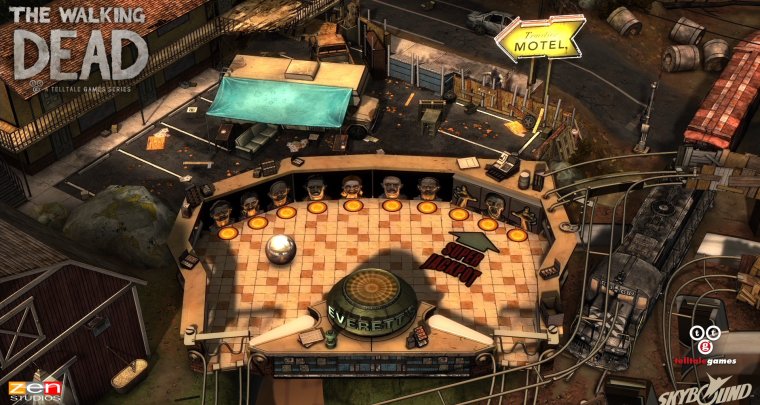 In the upper-left of the table is Everett's drug store, a location based on the game. The flippers in this area are in the opposite direction than you're used to, and the goal is to keep hitting the herd of walkers until you eventually knock some of them over so you can shoot your ball and escape. This grants a bonus in your score, but if the ball falls out of either side, the bonus is lost. It's a fun area to play in and is something a little unique compared to other tables.

Another somewhat unique feature is that the table shifts into darkness from time to time, similar to the Marvel Blade table (that, sadly, is not yet ported over to the Xbox One). You can still easily see what you need to do, but it adds to the atmosphere of sneaking around in the dark and is a great touch. 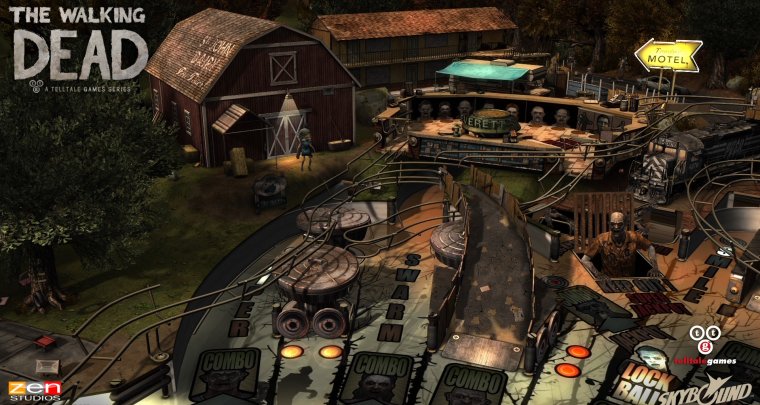 The Walking Dead table does a great job of being creepy. From the walkers moaning and rattling parts of the table, to the soundtrack, to the overall lighting, you can definitely tell that the table is part of a horror genre and it's very engrossing.

Overall, the table is entertaining with a lot of targets and ramps to aim for. Some of the extra features seem a little tacked on right now, but I hope Zen Studios continues to refine them to make the next table even better. While this may not be the best table Zen Studios has ever done, fans of the original game as well as fans of the TV show will love it. For everyone else, while not perfect, it's still a fun table to have in your collection.

The Walking Dead table is currently available through Xbox Live for $2.99. It's also available on the Playstation 3 and Playstation 4, as well as the PS Vita, Wii U, Android, and Steam.