With years of success behind Apple with the iPod, they knew they had to make a new product that would take the market by storm. So with the help of many incredible minds at Apple, they produced what would be the next and greatest thing that would take consumers by surprise. Rather than building off their highly successful iPod, putting a phone inside of an iPod simply wouldn’t work, so they had to re-invent the phone all together.

When Apple finally unveiled the iPhone 2G design, it surprised experts and consumers, showcasing a revolutionary device and operating system that have never been seen before. Apple had raised the bar with their new phone, making other phone manufacturers ditch their bar and flip phone designs and make them really take focus of the iPhone. A new generation was born with the iPhone, a generation so reliant on smartphones for their everyday needs.

On June 29, 2007, Apple released their revolutionary device that had consumers lining up for hours, even days in some cases, just to be the first to get their hands on the new device. Aside from a few activation bugs and AT&T reception issues, Apple knew they had a huge hit on their hands when stores sold out of the device so quickly.

Although the iPhone 2G came with some basic applications like Internet, Phone, SMS, iPod, Maps, Camera and a few other small applications, it was missing a lot of features. Queue the modding community.

So what was missing on the iPhone 2G 1.x firmware? The App Store of course. Apple didn’t introduce that until 2008, when they announced iPhone OS 2.0. However, where exactly did Apple get the idea to create the App Store that would allow users to instantly download and install user created content, apps and games directly onto your phone? The jailbreak community.

The very first jailbreak was released on July 10, 2007, weeks after the launch of the iPhone 2G. Jailbreaking allowed users to run unauthorized third-party code on the device, including the birth of what would become inspiration for Apple, Installer.app.

Installer.app was the first App Store available on the iPhone, which allowed users to download themes, games, applications and install tweaks that would change settings in the iPhone operating system that was not available to the user. This also started the cat and mouse game between Apple and the modding community, as they attempted to patch security holes in their operating system, preventing further jailbreaking.

With the jailbreak community already firmly planted, this sparked the unlock scene. Although unlocking and jailbreaking are completely different, they go hand-in-hand, as jailbreaking allows root access to the device, while unlocking overrides the carrier security measures, allowing the user to insert any SIM card and gain reception. This instantly became a big focus for many consumers who wanted the iPhone but didn’t want to use the iPhone’s exclusive carrier, AT&T. Unlocking the iPhone proves much harder for the modding community, as the hacker or hackers need to gain access to the phones baseband, while jailbreaking finds exploits within the iPhone, iPod touch and iPads firmware.

The first ever unlock was created by George Hots (GeoHot) and took him two months to hardware modify the phone to gain reception with T-Mobile SIM. Months later, the software unlock was born which allowed any user to unlock their phone within minutes, without the need for any hardware modifications.

The jailbreak community has seen a lot of new faces over the recent years, more hackers exploiting the phones vulnerabilities, which makes users wonder exactly how many security vulnerabilities there is in this software. Some of the more long-term community members, the iPhone Dev Team, Jay Freeman (Saurik) the creator of Cydia, MuscleNerd, and a number of others users have been working hard on keeping the phone jailbroken and unlocked for a number of years now. 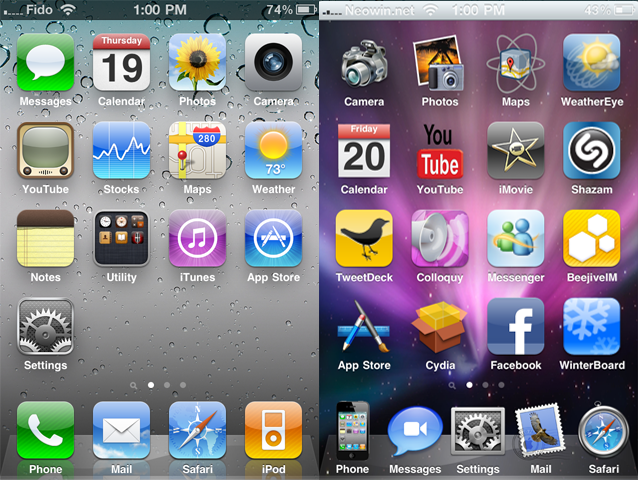 Some of the most recent community members, Planetbeing and Comex were the ones behind the most recent hack, jailbreakme.com, which allowed users running iOS 4.0.1 and iOS 3.2.1 to access a website and jailbreak their device using a PDF vulnerability found within Safari. This type of jailbreak hasn’t been available since iPhone OS 1.1.1.

Jailbreaking your iPhone, iPod or iPad allows the user to run third-party software, modify the look and even add features to the phone, enhancing your experience. The modding community has released things like customizable ringtones, background wallpaper support, App Stores (Installer.app and Cydia), copy and paste, multi-tasking, and many other features before Apple included them in future updates.

Before Apple included copy & paste in iPhone OS 3.0, the modding community came up with Clippy, a copy & paste tweak that ran on iPhone OS 2.x firmware. The basic functionality was the same in some versions; you hold the word you want, set the start and end points and either copy, cut or paste. On the left, Apple's copy & paste, and on the right, one of the versions of Clippy.

Even before the iOS 4.0 brought multi-tasking, the jailbreak community already had a little tweak called “Backgrounder” for iPhone OS 2.1. The app was available on Cydia and allowed users to press a sequence of buttons on the phone, enabling the app to run in the background.

So how exactly is Apple using the jailbreak community for innovation? Well, Apple has taken ideas from the jailbreaking community for years now; the most recent example would be the customizable backgrounds for the home screen and lock screen. WinterBoard allowed support to change the background for either just the home screen, lock screen or both. WinterBoard is based off of the highly successful SummerBoard for the original iPhone operating system.

So why isn’t Apple doing anything about this? Well, they’re slowly patching the holes found in the software and designing harder to break hardware, but let’s face it, without the jailbreak community, would Apple be forced to include all of these features inside of the operating system? Chances are slim. Without apps like Installer.app, how soon do you think Apple would have included an App Store into the firmware? The App Store now generates millions of dollars a year for Apple and helps drive sales for the device.

The U.S. Government Library of Congress Copyright Office recently passed a law that makes jailbreaking and unlocking your iPhone or any other mobile phone legal. However, this does void your warranty through Apple.

The views expressed in this editorial do not reflect those of Neowin.net