While Net Applications shows that Windows 8 is only making slight gains in the overall worldwide PC market, the hardcore PC gamers that use Valve's Steam service have been far more welcoming to Microsoft's latest OS. Today's newly updated Steam hardware survey shows that 11.65 percent of Steam users are accessing the service with either the 32-bit or 64-bit version of Windows 8. 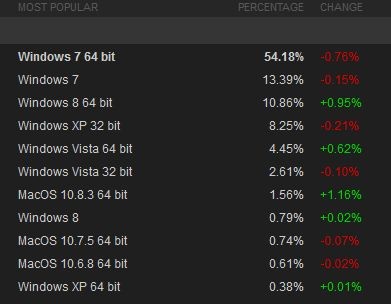 The hardware survey page for April 2013 shows that Windows 8 increased its share on Steam by almost a full percentage point; in March, Windows 8 was used by 10.67 percent of Steam subscribers. Windows 7 is still on top of the April 2013 survey with 67. 57 percent, down from 68.51 percent in March.

The hardware survey shows a ton of different Linux-based operating systems that are now accessing Steam. We added all of them up and found that all the Linux-based OSs cover just 1.56 percent of Steam users, which is down from 1.69 percent in March.