While Hollywood remains determined to enhance – or ruin – as many movies as it possibly can with 3D versions on the big screen, 3DTV has yet to make a big impact in the home. A new survey suggests that that’s unlikely to change for some time, with few consumers indicating that they definitely plan to purchase a new 3D-ready set.

Around one third of the 1000 US consumers surveyed confirmed plans to buy a new HDTV within the next twelve months: 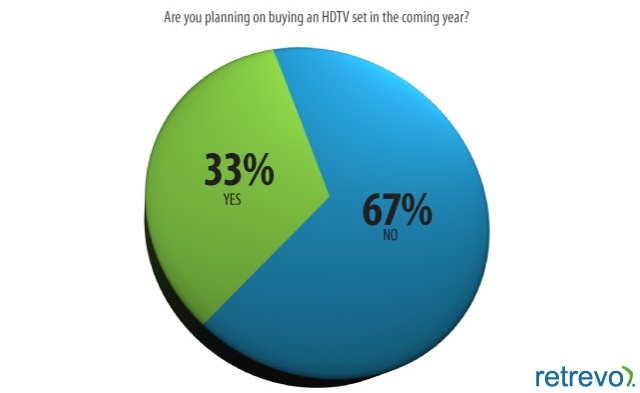 Of those intending to buy a new TV, just 22% answered with a certain ‘yes’ when asked if they intended to make their next purchase a 3DTV set. A further 23% indicated that they would consider a 3DTV only if the premium over a non-3D HDTV was sufficiently small. 55% stated no desire at all to buy a 3D-enabled television: 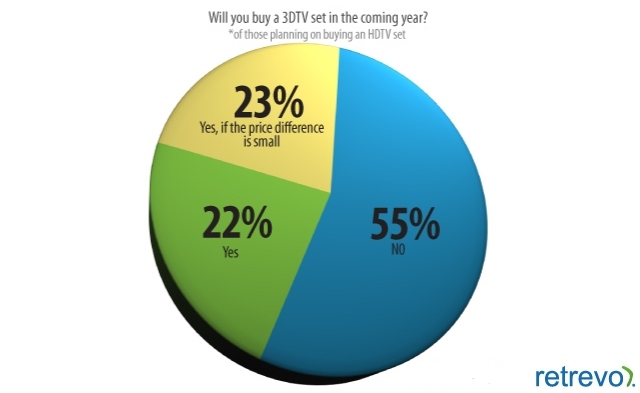 Assuming these figures are representative of the US market as a whole, it suggests that just 7% of consumers definitely and unconditionally intend to purchase a 3DTV in the year ahead. But why is that figure so low? One might well consider price to be a significant factor; economic uncertainties are undoubtedly having an effect on consumer willingness to spend on ‘big ticket’ items, and the fact that two-thirds of buyers have no intention of buying a HDTV at all clearly makes a more expensive 3DTV a much harder sell.

But Retrevo’s survey revealed that the two most significant concerns for buyers weren’t related to price. The perceived inconvenience of the glasses was too great an issue for many; clearly, while most consumers don’t mind donning 3D specs at the cinema for a couple of hours, the prospect of wearing them at home to watch TV isn’t an appealing one. 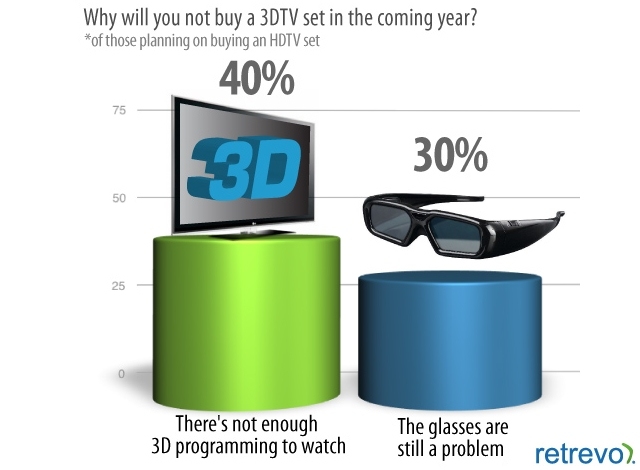 But the biggest single obstacle identified was the lack of 3D content, and that’s not an issue that’s easily or quickly resolved. Broadcasters are starting to invest in distribution of 3D content (like the UK’s Sky 3D channel and Virgin Media 3D On Demand), but production companies and networks still need to step up to create a lot more new and original 3D content, and that could take time.

Last year, Danielle Nagler, then-head of HD and 3D at the BBC, called 3D “a distraction from HD”, questioning whether audiences even wanted a full portfolio of 3D content all day every day. Citing the BBC’s commitment to delivering 3D for big events, such as Glastonbury, the London Olympics and Wimbledon, she said that “3D is about theatre”, adding that “we need to see what the long term benefits of 3D to broadcasters is, before we commit”.

That could be the big problem for 3DTV – there’s a clear shortage of TV content, but while consumers understand the ‘wow’ factor of 3D, they apparently remain indifferent to wanting it in their homes, and without significant demand, content creators won’t be motivated to invest more heavily in delivering 3D content.