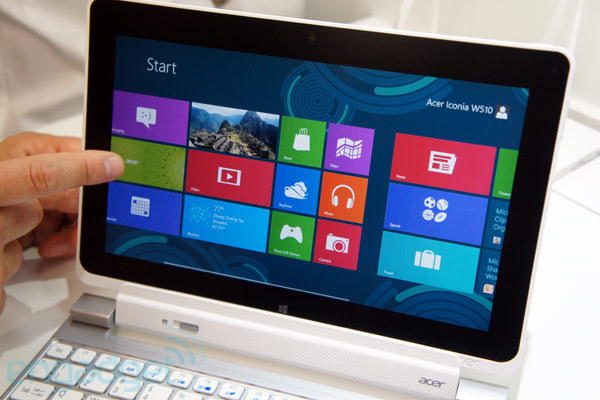 In addition to the two Windows 8-based touch screen Ultrabooks it announced today at Computex, Acer also revealed plans for two Windows 8 tablets. Engadget posted up some hands-on impressions of these two models, the Iconia W700 and the Iconia W510.

The Iconia W700 is going to be a pretty large 11.6 inch tablet with a 1920x1080 resolution screen, which can support up to 10 fingers for touch interaction. It also comes with three USB 3.0 ports, Dolby Home Theater audio hardware and a battery life of up to eight hours. It will have a five megapixel rear camera and a front facing camera.  It comes with a cradle that can set the tablet up to a 70 degrees angle for landscape mode or down to 20 degrees for touch screen features.

The smaller Iconia W510 has a 10.1 inch screen. There will be a removable keyboard dock available for it that also adds a second battery to boost battery life, which is then up to 18 hours. With the keyboard dock, the tablet can swivel up to 295 degrees. There's no word on any other hardware specifics such as the processor, amount of memory, storage for either tablet. There's also no word on pricing or availability.