It was nearly a year ago at the 2013 Mobile World Congress that Nokia first announced its budget priced Lumia 520. Today, the phone has become the biggest sales success story for Microsoft's Windows Phone operating system and the latest user statistics from the AdDuplex firm show no signs of that slowing down anytime soon. 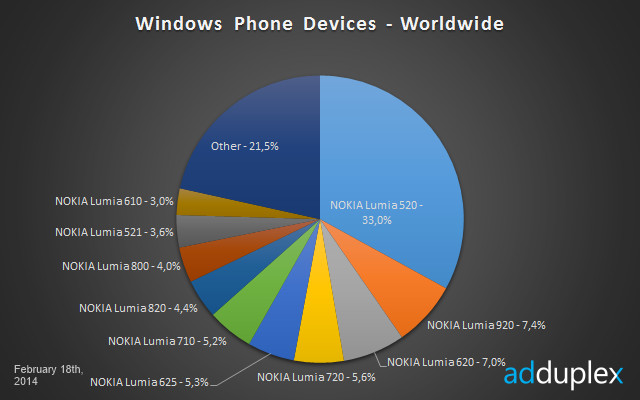 The official AdDuplex blog has the February 2014 overview of the Windows Phone market, based on data collected from 3,310 apps that use the company's ad network. Worldwide, the stats show the Lumia 520 now has 33 percent of the market share for the OS. If those numbers are combined with the 521 variant, it has 36.3 percent of the market.

In the US, the 521 is still leading with 27.4 percent, followed by the 520 with 14.9 percent. The high-end smartphones that get the most promotion and marketing from Microsoft and Nokia still are not doing as well as the budget priced phones. The Lumia 1020 is eighth on the U.S. chart and doesn't appear at all in the top ten worldwide.