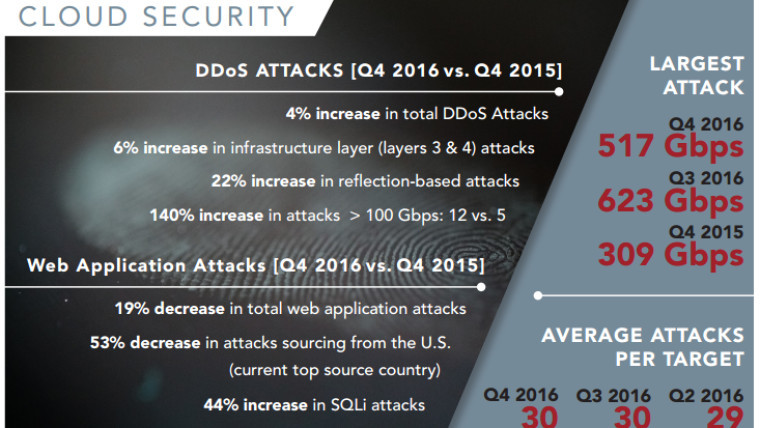 Akamai has released its latest “State of the Internet” report looking at the last quarter of 2016 and the digital attacks that took place over that time period. The report is a mixed bag of information, as the overall trend of attacks is ticking upwards, even if some attacks have decreased in scope and capability.

The last time we looked at the company’s report, for the third quarter of the previous year, Akamai signaled a huge increase in the number of distributed denial of service (DDoS) attacks compared to previous years. This still holds true for Q4 as well, with the content distribution company saying it saw an increase of 4% in the number of DDoS as compared to the same time in 2015. What’s perhaps more worrying is that the number of “mega attacks” over 100 Gbps has increased by 140% over the same period, with 12 such attacks taking place in Q4 2016, up from 5 in Q4 2015.

If there’s some good news it’s that the attacks themselves seem to have slowed compared to just one quarter earlier, which saw record-setting DDoS numbers. As compared to Q3 2016, Q4 2016 saw a 16% decrease in total DDoS attacks, and a 37% decrease in attacks over 100 Gbps, 12 vs 19. Despite that, the number of IPs implicated in DDoS attacks grew significantly, with more than 180,000 IPs sourced to the US.

Q4’s largest DDoS attack was also somewhat special, because it did not come from the Mirai Internet of Things botnet, which has been making the news recently and was responsible for the previous quarter’s record attacks. Instead, the largest attack in Q4 reached 517 Gbps and came from the Spike botnet, which has been around for two years and generally infects x86 Linux-based machines, according to Akamai. That being said Mirai was still responsible for seven out of the 12 "mega attacks" in this quarter.

In terms of web applications attacks, things are a bit more optimistic. Overall, there were significantly fewer such attacks with a 19% drop compared to Q4 2015, and a whopping 53% decrease in attacks originating in the US, though that’s still the top source country.

However, looking at the last two sequential quarters, things are less rosy than they appear, because compared to Q3, Q4 2016 saw a marked 27% increase in web application attacks with a 72% increase in the number of attacks originating in the US.

You can check out the full report along with extra technical details at the source link below.