TechCrunch has confirmed with Amazon that they are, in fact, giving select Amazon users the ability to get a Kindle with no risk involved. If you purchase the Kindle through the promotion and, within 30 days, decide you aren't entirely happy with it, Amazon will let you keep the Kindle (and its snazzy cover).

It seems that the special offer is being extended to Amazon users who are regular book purchasers on the site. Amazon's offer says that "Because you've been an unusually active book customer, we're confident you will love Kindle." It's unclear what they mean by "active," but many users who have recieved the offer are those who purchase at least a book a month (some exceptions have been reported as well). 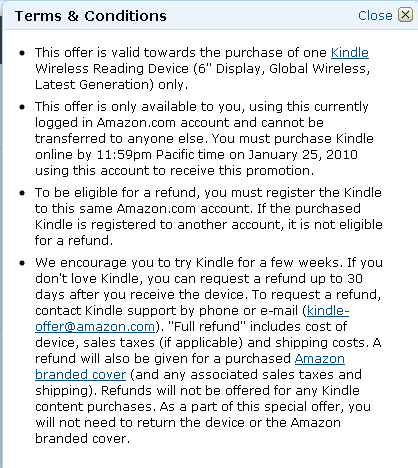 This is a pretty bold move by Amazon. It seems that regardless of the amount of competition building up in the eBook market (like the Nook), Amazon seems pretty confident in their product. If you take advantage of the deal, what's really stopping you from calling within thirty days and saying you don't like it, even if you do? Unless heavy book readers are known to be, statistically, more honorable than non-book folk, Amazon could take a large hit by offering such a promotion. Will they let you keep the device, but somehow disable it from using the Amazon store, if you request a full refund? The terms of the deal don't mention any sort of catch like that. Perhaps they feel that even if you take it for free, they will still sell you enough eBooks to make up for the lost cost. It will be interesting to see if this works out in Amazon's favor. After all, the Kindle isn't cheap to make ($185 in parts). 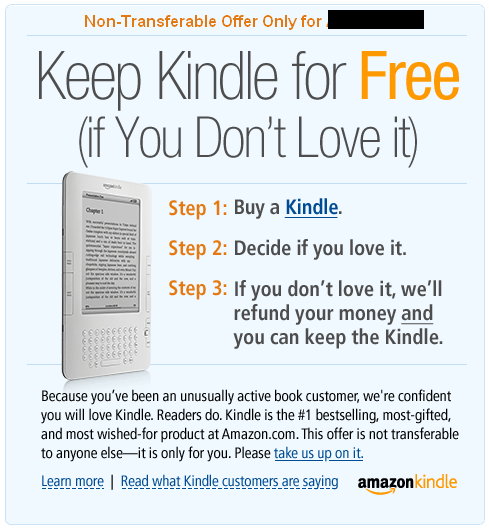 All images were taken from TechCrunch.