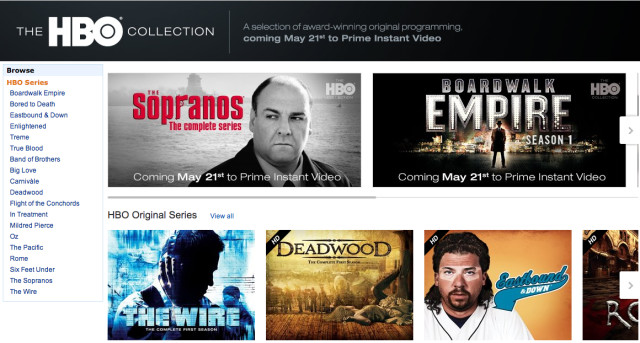 Today, Amazon announced that it would be adding HBO content to its Amazon Prime streaming service in an exclusive multi-year deal. The new deal would bring classics like The Sopranos, Six Feet Under, The Wire and more to the online subscription service. Amazon will begin releasing the first wave of content on May 21, 2014, with other content being released over the course of the multi-year deal.

The initial wave of releases from Amazon on May 21st will include:

This deal is the first of its kind giving Amazon a huge advantage over other streaming services like Netflix and Hulu Plus. Later in the year, Amazon will also add HBO GO support to its newly released streaming box, Fire TV. Despite Amazon Prime's recent $20 price increase, it has continued to add value to its service by adding HBO content, Fox's 24 and Amazon Originals.