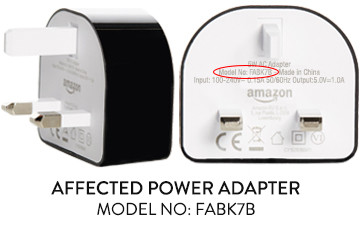 Amazon has announced a voluntary recall of power adapters sold with some of its Fire tablets in the UK and Ireland, due to the possibility of an 'electrical shock'.

The recall affects chargers included with the Fire 7" and Fire Kids Edition 7" tablets in the UK, which can be identified by model number FABK7B on the wall plug. Amazon explained:

We have determined that, in rare cases, when the power adapter... is pulled from the wall socket, the adapter assembly may detach and create a risk of electrical shock. Affected adapters were sold only in the United Kingdom and Ireland from September 2015.

Amazon is urging customers to exchange their power adapters for a free replacement and to stop using any affected adapters immediately. In the meantime, Amazon advises that users can continue to charge their tablets by connecting the included USB cable to a computer "or another compatible adapter".

Customers can either request a free replacement direct from Amazon, or they can request a £12 credit to their account, so that they can purchase an alternative adapter of their choice. Whichever option they choose, customers will be required to send the original power adapter back to Amazon.

Further information, including how to request a replacement or credit, is available here.