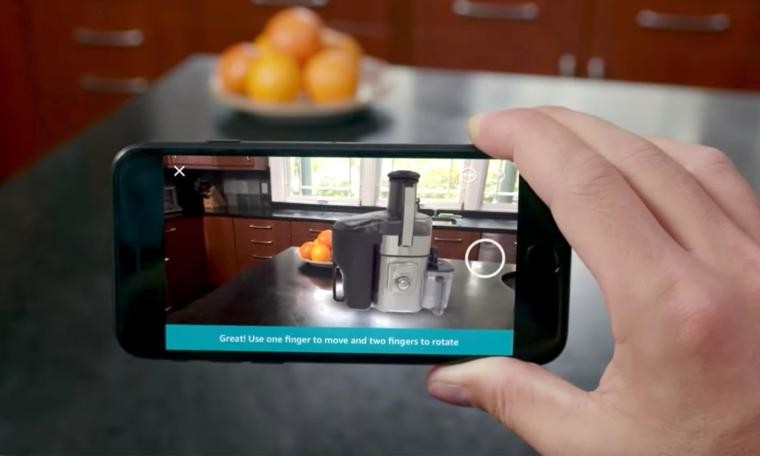 The uses of augmented reality are expanding, especially into the retail space. First, IKEA created an app that allows users to see how certain furniture they might be considering would look like in their home. Now Amazon is doing the same thing with a feature in their app called AR View.

The feature, which is currently in only the iOS Amazon app, allows users to take thousands of items - from toys and games to furniture - and home decor and view them through a smart device in a familiar setting of the home or office. It offers a way for users to see if that purple couch really goes well with their green rug. Granted you may not need to place toys and games, or an Amazon Echo with the AR View, but the feature could be very helpful for furniture and appliances

Once you open the updated Amazon app, tap the camera icon usually used for scanning barcodes and then select AR View. There will be a top menu where you can choose from various categories of items, including "top picks" as chosen by Amazon. Once an item is chosen, it can be rotated 360 degrees as needed to get the best view of the item in its desired location.

Amazon experimented with AR before in the form of AR stickers for various products, but the feature - which is still available inside the Amazon app - was not as functional because the selection of items was limited and the items themselves actually looked like stickers with large white borders around them. The new feature improves on that with more believable look and placement.

The feature, which uses Apple's ARKit found in iOS 11, is rolling out to iOS devices today, so watch for your Amazon app to be automatically updated, or do it yourself manually before trying the new feature.