Apple has been accused of ‘doctoring’ an image in order to damage Samsung’s defence of their Galaxy Tab 10.1 tablet. The injunction filed by Apple alleges that the Galaxy Tab 10.1 design is derivative of their iPad 2. Now, the Cupertino based company has been reported to have modified an image in order to show more of a similarity between the two devices. The FOSSPatents blog post on the topic can be read here, in order to give a further insight. 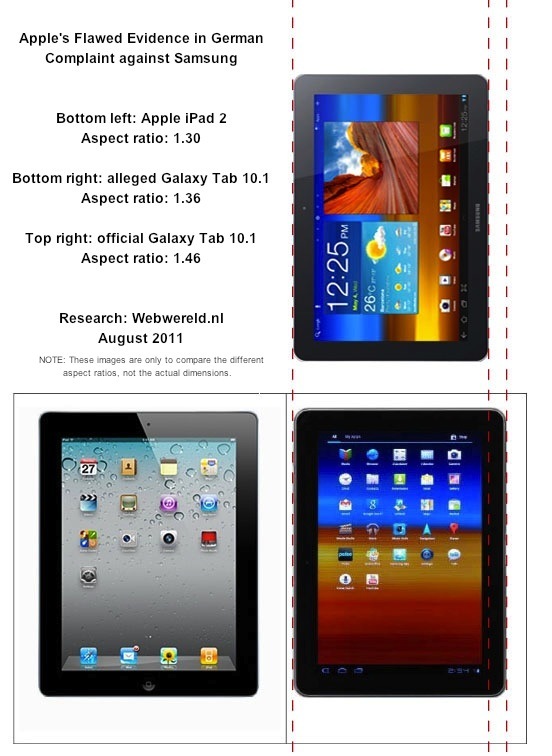 Arnout Groen of Klos Morel Vos & Schaap believes the mistake was deliberate, as he told Webwereld (English translation). Groen, who specializes in matters of intellectual property, had the following to say:

“This is a blunder. That in case a mistake is made on a form can hardly be a coincidence. There is someone very flown off the road in his desire to be right. The relationship of the alleged Tab are distinctly different so it looks more like the iPhone. How this faux affects the case of course depends on the discretion of the court. but a swipe of the German court seems at least in place. "

In civil proceedings the parties have a legal duty to evidence "fully and truthfully" to perform. This is true whether deliberately or accidentally incorrect evidence has been submitted, and as the court may commit significant consequences, explains Green. "In design cases concern the appearance of products, making it essentially correct about the correct and true information. This is especially true in an ex parte decision."

Florian Müller, a Munich-based consultant for intellectual property cases, believes the image could have major implications for the Apple case. Of course, it balances on how the judge sees the modified image of Samsung’s Android tablet. As a result of the controversy surrounding Apple’s submitted evidence, the injunction against Samsung has been suspended in all European Union countries, except for Germany.

Interestingly, one ZDNet comment states that the image of the Galaxy Tab also has a silver border. The Tab does not have this silver border, though the original iPad did. This has led to the user, ‘reklissrick’, suggesting Apple could have went as far as Photoshopping an image of Android onto an entirely different image. Of course, this theory is rather outlandish.