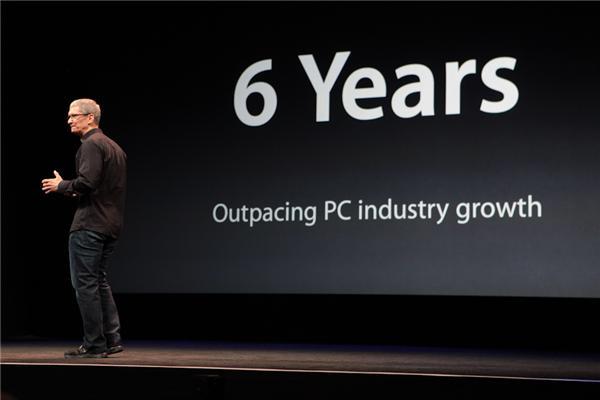 Apple began its iPhone 5 press conference today by taking some shots at other PC makers (in general terms; no specific names were mentioned). Apple CEO Tim Cook used sales of its iPad tablet to show that their strategy is working.

News.com reports that, during the press conference, Cook said that the iPad sold 17 million units between April and June 2012. Cook claims that the amount of iPads sold by Apple was higher than any PC  maker sold of their entire PC line. Cook added his frequently used line, "we are in a post-PC world."

In terms of Apple's Mac business, Cook said that sales of the company's latest Mac OS X update, Mountain Lion, have totaled seven million copies since it was launched earlier this summer. Cook also said that the company's MacBook notebooks, including the new Retina Display MacBook, now have 27 percent of the entire notebook market share in the US for the past three months.

Finally, Cook said that the Mac business has grown 15 percent in the past year, compared to just two percent for the PC industry. He added that this was the sixth year that Mac sales growth has outpaced that of PCs.