At its event today, Apple has finally unveiled the iPad Pro, a 12.9-inch tablet which the company claims is the "most capable and powerful iPad" they've ever created. The device was previously rumored to compete directly with the upcoming Surface Pro 4 from Microsoft. 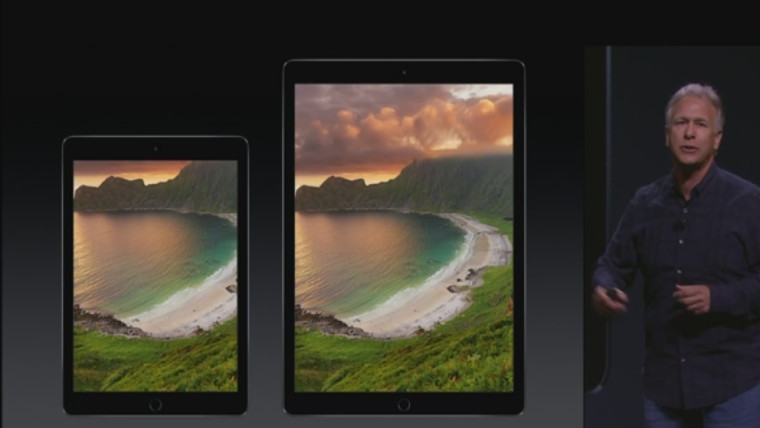 Apple's iPad Pro features a 12.9-inch screen which will showcase 5.6 million pixels on a single display. The device will be powered by iOS 9, which promises more multi-tasking features to make it a productivity-focused tablet, along with a full-sized virtual keyboard. The iPad Pro will run on a new "console-class" third-generation 64-bit A9X GPU which is 1.8 times faster than the one present in the iPad Air 2. The company also claims that this is faster than 80% of the portable PCs and it also packs along two times better graphic performance, while allowing the tablet a 10-hour battery life.

The iPad Pro will also include 4 speakers, and will be just 6.9mm thick as compared to 6.1mm on the Air 2, and will weigh just 1.57 pounds. The tablet will utilize an 8 MP iSight Camera as well as Touch ID. Apple has also announced a physical keyboard for its new tablet, very similar to the one utilized by Microsoft's Surface line of devices. Along with this accessory, the company has also announced a stylus, which it has dubbed as the "Apple Pencil".

The iPad Pro will be available in three storage options. The 32 GB version will cost $799, while the 64 GB option will set you back $949. Both these iterations will support Wi-Fi only. The 128 GB version will support both Wi-Fi and cellular up to 150 Mbps LTE and will cost $1079. Meanwhile, the Apple Pencil will cost $99 and the "Smart Keyboard" will be available for $169. All-in-all, buying the top-tier iPad Pro along with all its accessories will cost customers as much as $1347.