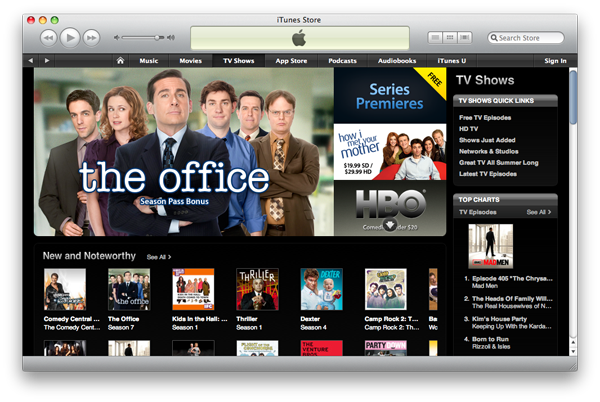 Suspected earlier this year by some, Apple appears to be in the process of creating a process where iTunes customers may rent TV shows for 99 cents.

Three people familiar with the plan, according to Bloomberg say that Apple is talking with News Corp about allowing rentals of shows from their Fox channel. These rentals would be good for 48 hours and would be available within 24 hours of the air date. The same sources also say that CBS Corp. and Walt Disney Co. are in much similar talks with Apple about rentals as well. Steve Jobs, Apple's Chief Executive officer, is a major Disney board member and since Disney purchased Pixar Animation Studios, that also made Jobs the largest shareholder.

This plan is thought to work very similar to how the movie rentals on iTunes work, where you rent for a low fee and then have a time-frame in which you are allowed to watch the movie. The television show rentals will also be commercial-free, so it will work just like any other downloadable video in the iTunes store.

Adding a rental option would help Apple take back some lost ground that Netflix and Amazon.com have taken with their services. Netflix offers a movie and TV show subscription service that is accessible on multiple devices for live streaming, or DVDs and Blu-Ray discs can be put onto a wish list for them to send out to your place of residence. Netflix doesn't always have the latest TV shows up for streaming as they focus more on the entire season packs. Amazon.com offers an easy to use On-Demand video service where you can choose to stream the TV show or Movie, or you have the option to download it up to a few devices. Amazon.com, unlike Netflix, will have the latest episodes of shows, although there is no subscription model like Netflix so the user will have to purchase each episode or buy a season pass.

Apple is planning to hold an event in San Francisco on September 7th to reveal the service, new products, and to get the word out before the prime-time TV season begins.