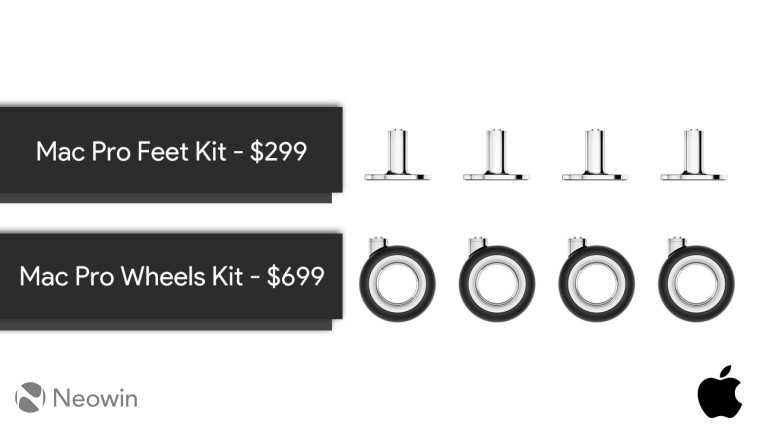 Apple launched the newly redesigned Mac Pro back in 2019 at its WWDC conference. The device was claimed to be the company’s most powerful computer and the claimed power came with an equally high price. While the Mac Pro and the Pro Display XDR were priced at a premium, what was also priced exorbitantly were simple additions such as the wheels, which were $400 add-ons. The wheels, however, don’t even have locks to prevent them from rolling.

If you did not order your device with the wheels or if you would like to stop your $50,000 computer from rolling off and crashing into things by replacing the wheels with the feet, Apple has begun selling those replacement options (spotted by 9to5Mac), but you would want to give it a thought before going for them. The company is now selling the Mac Pro Feet Kit for $299 and the Mac Pro Wheels Kit for a whopping $699.

The Cupertino giant says the wheels are “custom-designed stainless steel and rubber wheels”. The accessories come with a 1/4-inch to 4 mm hex bit, but the firm says that additional tools would be necessary for installation. Therefore, those that want to install these accessories will need to be well-versed in basic installation tools.

Apple today announced another product at a more affordable price, the second-generation iPhone SE, that costs $399. While the Wheels Kit and Feet Kit are available for purchase, the iPhone SE pre-orders begin on 17 April.