Earlier today, HTC announced that its One M8 phone running Windows Phone would be headed to Verizon as an exclusive. Well, it turns out it's not that exclusive as AT&T is now saying that they will carry the phone too. While Verizon's phone can be picked up in-store starting tomorrow and can be ordered online today, AT&T has not said when you can get their version of the device.

It's not a huge surprise considering that HTC already has a solid relationship with other carriers besides Verizon and AT&T does carry the Android version of the device too. Verizon likely paid for a small timed exclusive which explains why AT&T is making a fuss about it now to show that they too will soon have the device; it's a move to keep consumers switching platforms to obtain the best new Windows Phone on the market.

While AT&T has not said anything about the price of the device either, we would expect it to be identical to that of Verizon or possibly a tad cheaper in an attempt to attract customers over to big blue.

Update: AT&T has now launched a "registration" page that will notify you when the device becomes available for pre order. 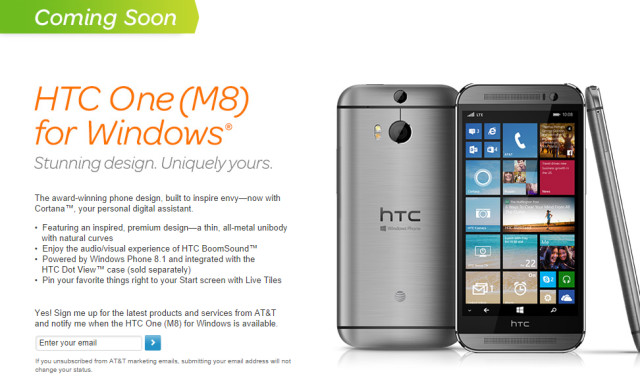 Please do note that submitting your email address does not reserve the device, it just makes you aware of when it will be possible.