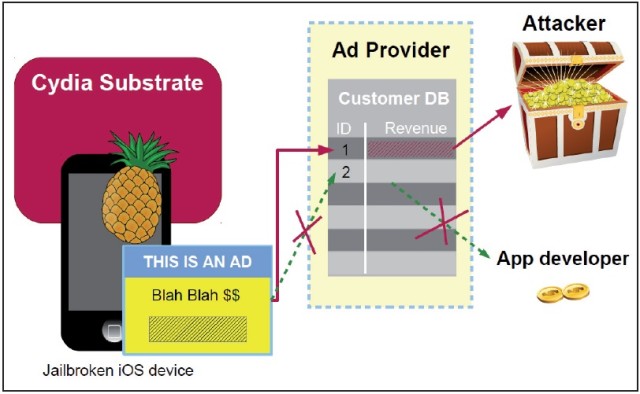 A security researcher has revealed that over 75000 iOS devices have been infected by a malware known as AdThief or "Spad."

iOS device users are often quick to jailbreak their devices, ignoring the security risks that come with exposing the system, in order to get more functionality out of their device. However, once again, a security risk associated with such devices has been exposed by a security researcher. According to the researcher, Axelle Apvrille, the malware targets various advertising SDKs and modifies the developer or promotion ID to match that of the hacker. Using this technique, the malware allows the hacker to gather all the revenue generated from the infected devices through advertisements.

15 advertising SDKs or adkits, including Google Mobile Ads and Weibo have been found to be affected by the AdThief malware. The researcher has managed to track down the author of AdThief online through some of the debugging information from the malware's source code. The developer, currently known by his online aliases "rover12421" and "zerofile," is revealed to be an Android developer who admitted creating the malware which he has now discontinued.

The developer has said that he created only the basic ID replacement functionality and someone else might have continued the development. He has further denied spreading the malware that has affected a large number of devices and grabbed revenue from 22 million ads.