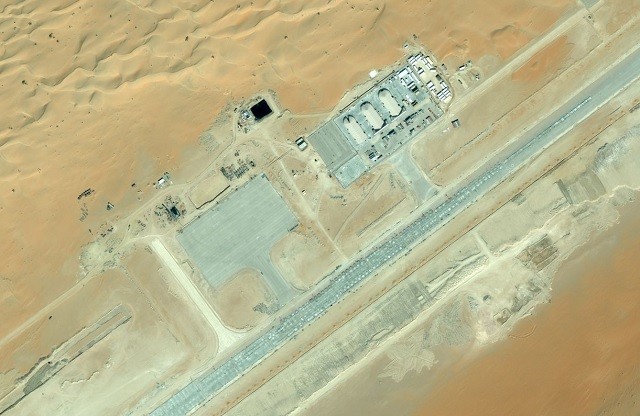 Just how good is Bing's aerial imagery? It could be good enough to reveal a secret United States drone based in southern Saudi Arabia, if a report from Wired is to be believed. Located very close to the Yemen-Saudi Arabia border, the alleged drone base is built in the middle of a vast desert, hundreds of kilometers from civilization and far off Saudi highways.

Zoom out too far and the base disappears into a vast sea of orange-brown soil, making its discovering nearly impossible without someone's knowledge of the location. The New York Times talks briefly about a CIA base in Saudi Arabia that was built around two years ago to carry out drone strikes on neighboring Yemen, however digging and interviews by Wired's Danger Room strongly believes the base discovered in Bing Maps is the one being talked about.

If you head directly to Bing Maps you can take a look at the secret base, including several United States-style aircraft hangers big enough to house Predator and Reaper drones, and a number of airstrips including a larger one, apparently still under construction in the imagery, that could be used for landing larger aircraft. Google places a marker for "Umm Al Melh Border Guards Airport" in the same location, but no base can be seen in the low-resolution images, and searching for said airport reveals basically nothing.

This weekend, if you end up with some spare time, head over to Bing Maps to snoop around the base; too bad there's no Streetside view for the area, or things could have been really interesting.