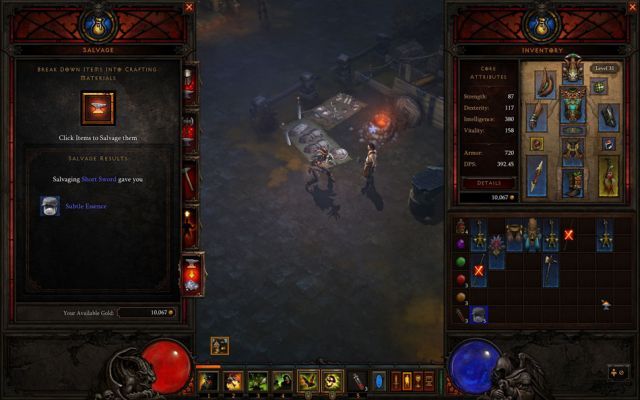 It's been over three and a half years since Blizzard announced its plans to release Diablo III, the long awaited third game in its hit fantasy action-RPG series. Since then, the team at Blizzard has been working on the game and showing it off to the public at events like Blizzcon. In September 2011, Blizzard launched its closed beta test of Diablo III, and later that month Blizzard announced that the game had a new target release date of "early 2012".

However, the game is now looking like it might even miss that "early 2012" release date window. This week, Blizzard's director for Diablo III, Jay Wilson, posted up a lengthy article on the game's official web site announcing that the team will be making a number of system changes in Diablo III. Among the changes is the elimination of the Scrolls of Identification and the the Mystic artisan and altering the core character attributes to Strength, Dexterity, Intellect, and Vitality.

Wilson also says that the Diablo III team has even more changes in the works, saying:

We’re also working on a number of other large systems changes -- specifically with the skill and rune systems. We're not quite ready to share what those are just yet, but we look forward to being able to do so in the near future.

Why make these changes now, when the game seems to be getting close to its release date? Wilson says:

Our job isn't just to put out a game, it's to release the next Diablo game. No one will remember if the game is late, only if it's great. We trust in our ability to put out a great game, but we're not quite there yet.

He didn't commit in his post if Blizzard plans to delay the release of the game as a result of these changes but it does seem like the development team is making a lot of major alterations in the game at a fairly late point in its development. We might learn more when Blizzard's parent company Activision Blizzard reveals its latest financial numbers on February 9.