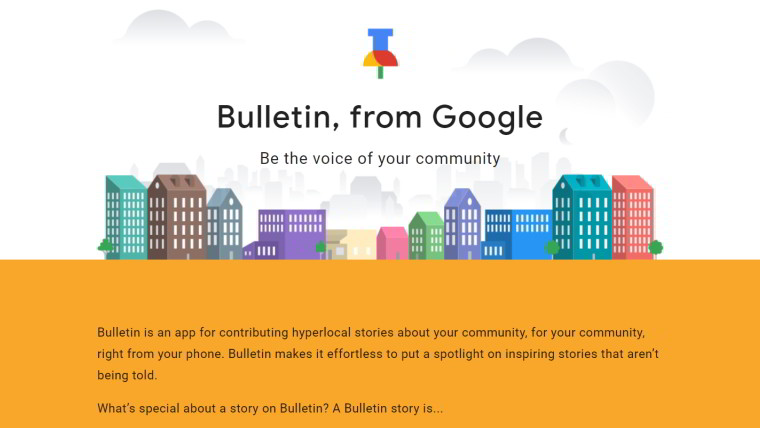 Google is testing out a new app that will let wannabe journalists, or just your average enthusiast, publish "hyperlocal" news directly to the web as a searchable document by people with your same likes and passions.

The progressive web app, called Bulletin, is available via web or through Android by invitation. An iOS version is planned and should arrive in the next few weeks. The beta program launched in Nashville, with another version popping up in Oakland starting next week.

Nothing needs to be downloaded, as a Google rep kept emphasizing "effortless" in his presentation to local bloggers in Nashville. Users can write and add photos to any document they like and when they are done with it, immediately post it to the web, where it can be shared via social media, or found through Google search.

Google said this "hyperlocal" news allows everyday people to instantly share stories that they feel are underreported, be it good or bad, from local elections to very bad weather. Google sees it as a platform to let locals get a story out there that would not otherwise be reported.

The service will then keep track of what users write, as it is tied to their Google account, thus allowing for the presentation of traffic statistics, likes amassed and places where the article has been shared. It also allows users to create an index of all the stories they have written.

Google said is also going to be working with local news organizations where some stories may be published with credit. Of course, posters will also need to follow specific guidelines laid out by Google to use Bulletin.

“Bulletin is an experimental app that gives people an easy way to tell stories about what is going on around them -- ranging from local bookstore readings to high school sporting events to information about local street closures," Google spokeswoman Maggie Shiels told Neowin. "We are excited to see how people use the app during this pilot phase."

It seems to be in direct competition with Facebook and Twitter, which already get their fair share of "breaking news" from anyone with an account. However, while it may be a good thing on the surface, a potential for abuse is there, even with firm guidelines, especially with the already rampant nature of fake news, moreso if it is picked up by a news organization.