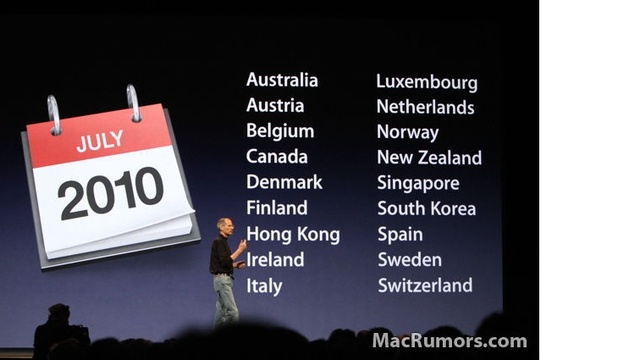 All three major Canadian cellphone providers have confirmed their intent to release the iPhone 4. With an official release on the Rogers blog at Redboard, and emails to Bell and Telus, all three carriers have confirmed that they will begin providing iPhone 4 shortly in July. This confirms the keynote assurance that the phone will reach Canada no later than July.

Rogers has stated that iPhone will be released in "coming weeks" and suggests that any delay will be due to shipments from Apple. Bell confirmed to MobileSyrup that “Yes, Bell will launch iPhone 4 in coming weeks. We will make more information available soon," and Telus confirmed with a similar statement, stating: “Thought I’d share with you that TELUS today confirms it will launch the iPhone 4, the thinnest smartphone in the world with the highest resolution display ever built into a phone, in Canada in the coming weeks.”

For those interested in an upgrade, Keith from Redboard has explained that "nothing’s been communicated to Customer Care agents about whether or not Rogers will introduce an early upgrade program, but if you haven’t upgraded since July 2008 you likely qualify under standard upgrade program on your 2-year aniversary date." Keith continued and also stated that Fido will carry the device as well.

Recently acquired by Bell, it is safe to assume that Virgin Mobile customers will not be disappointed either, as the iPhone 3GS was released concurrently at Bell and Virgin.

None of the big three have confirmed exact dates or pricing. Rogers is said to control 38.5% of the Canadian cellphone market, but with the new Bellus HSPA network expanding, and the availability of a plethora of new smartphones, Canadians finally might have something to be excited about. Don't hold your breath for competitive pricing just yet.